Visiting The Seaport Town Of Emden In Northern Germany

Follow along on our photo tour filled with travel tips as we discover Emden in the Northern-western part of Germany.

After our first three day train trip to the Bavarian Alps region in Southern Germany, we wanted to head North for a few days. The little seaport town of Emden was the perfect destination for us. Easy to get to by train, we found another great deal from the Deutsche Bahn that included a two night stay at a wonderful hotel, with lots of local attractions. Emden is a city in Ostfriesland, a region in Lower Saxony in the extreme north-west of Germany. Scroll down to see pictures and a video to hear the Glockenspiel (chimes) of Emden. 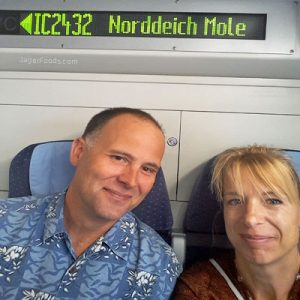 Emden is a very pretty little town with red brick houses. There is a harbor in the center of town, a ship port and waterways (grachten) that weave their way through different parts of the town. According to Wikipedia, Emden is a town and seaport in Lower Saxony on the river Ems.

The exact founding date of Emden is unknown, but it has existed at least since the 8th century. These days the main industries in Emden are automobile production and shipbuilding. Volkswagen runs a large production plant just outside town making VW Passats. 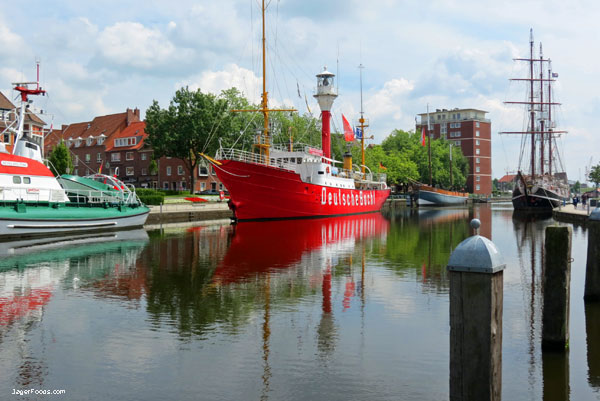 At the Emden harbor you can purchase tickets for a 30 minute harbor tour, a Grachten (canals) boat tour, as well as boat tickets to several of the outer islands like Aurich, Ditzum and Borkum. Check for available dates and book your ticket online at AG EMS. 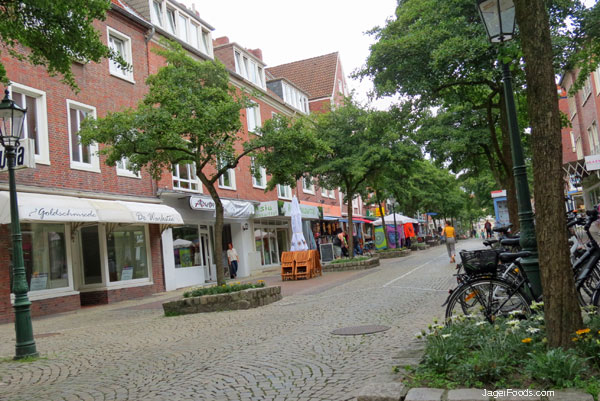 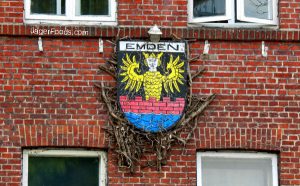 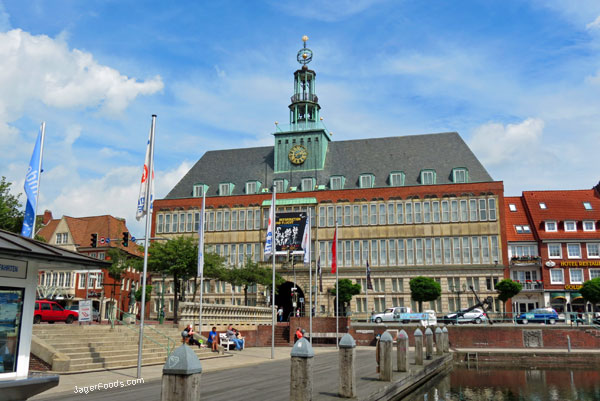 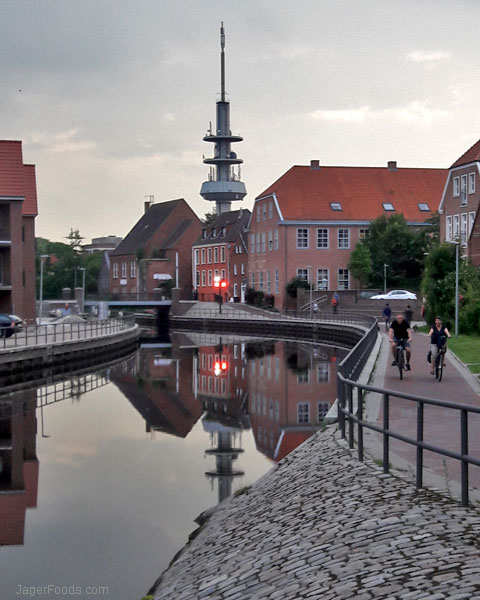 Emden’s picturesque canals and the harbor invite you to take a trip through the “Venice of the North”.

The little town of Emden has a lot of history. In the sixteenth century it was the most important haven for exiled Dutch Protestants. In the book ‘Emden and the Dutch Revolt‘ you can read about Exile and the Development of Reformed Protestantism, if that is something that interests you.

Now, take a look at this short video to hear Emden’s Glockenspiel (chimes) and to get a look at the harbor:

During our short stay in Emden we stayed the Upstalboom Parkhotel. It is located on Friedrich-Ebert-Straße which is about 20 minutes by foot from the train station and a short 5 minute walk from the downtown area. The hotel has a nice outdoor seating area which is right next to a road which is pretty busy during the day but quiets down at night.

All of the staff at the Upstalboom was very friendly and helpful. Our room was roomy and clean with a nice bathroom and a very comfortable bed. We had half board which included a nice breakfast buffet as well as a huge dinner buffet or our choice of a 2 course meal (first night) or a 3 course meal on the second night. We opted for the buffet and were not disappointed. The food was wonderful both nights! 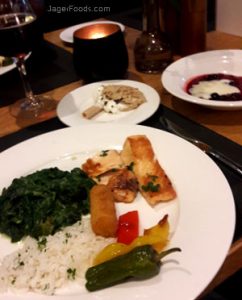 We highly recommend the Upstalboom Parkhotel in Emden. 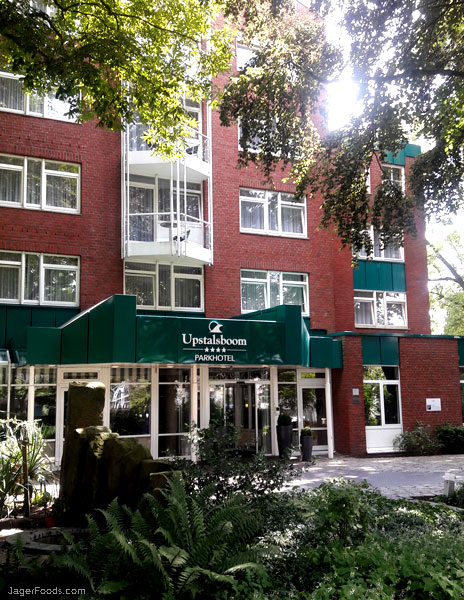 Train Trip To Norderney and Hamburg

While we were in Northern Germany we made it a point to visit the island of Norderney as well as taking a side trip via Deutsche Bahn (train) to the ‘Hansestadt’ Hamburg (hanseatic town of Hamburg). Take a look at our travel pictures then scroll down to leave us a comment… 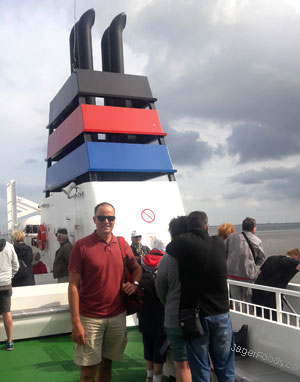 Nick is posing on the ferry Fresia III to Norderney. Get ferry information here.. 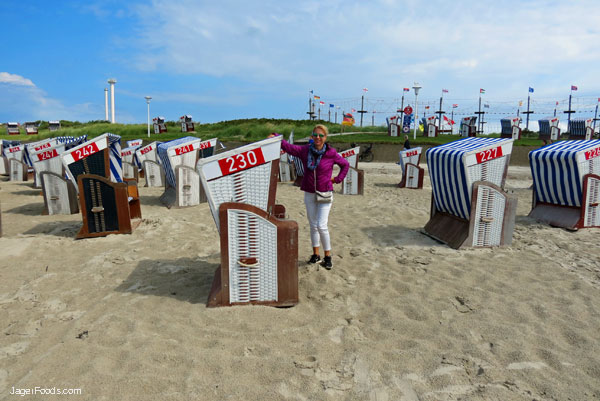 The Norderney beach at summer. Yes, it was chilly enough to wear a jacket. 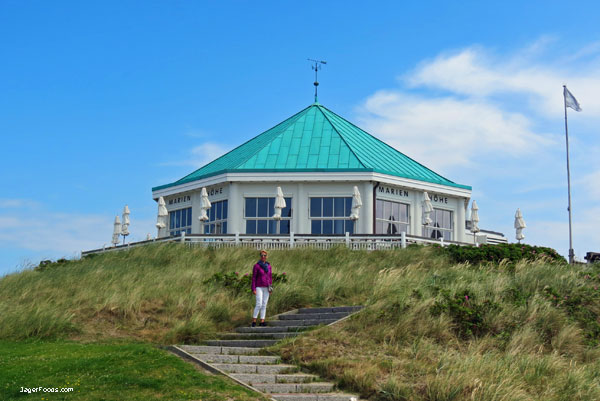 We had a fun and relaxing day on the island of Norderney. We found a quaint little restaurant off the beaten path and scrolled through some of the tourist shops. You can find out more about this beautiful ‘Kurort’ on the ‘Norderney- Meine Insel‘ website. 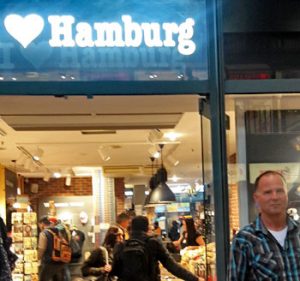 The next day we made our way back to Schweinfurt but not before stopping off in Hamburg. Hamburg is the second largest city in Germany and was the home for Silke’s mom for several years while she was a child. A tourist destination for both domestic and international travelers, we found ourselves in a hub of activity. The day was rainy but we still were able to find our way around the shopping district and the Hamburg Rathaus (city hall or town hall). Visit the official website for the city of Hamburg, Germany. 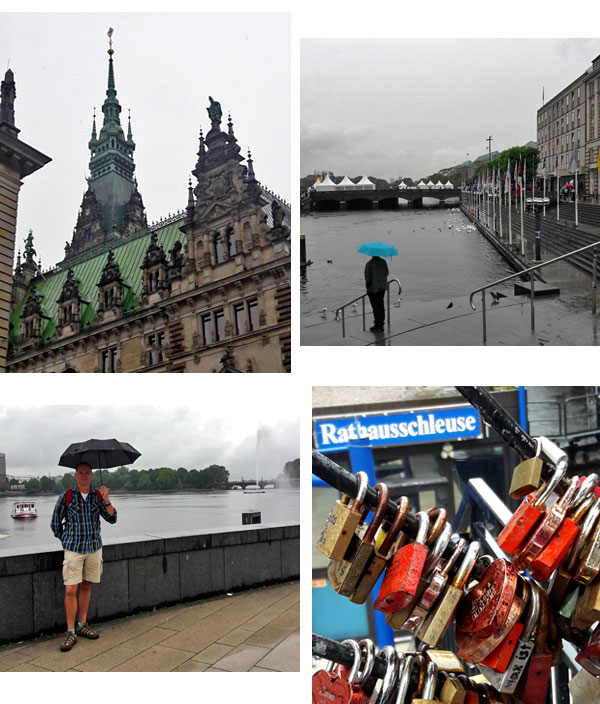 With a little time left and the weather being uncooperative, we decided to sit back with a drink and enjoy the Northern German atmosphere that was all around. From people coming and going out of the many shops to the workers putting up a stage for an event that would happen over the weekend, we felt quite content to sit and watch the view. 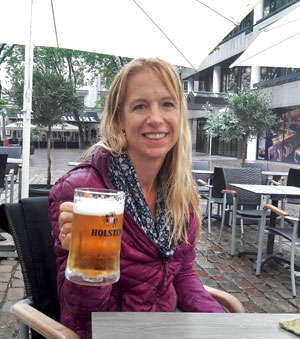 Drinking a beer in the rain. Prost!

We thoroughly enjoyed our three day trip with the Deutsche Bahn to the Northern part of Germany and have our next trip booked already. This time we’ll head to the East into the Czech Republic to visit the city Prague.

See more pictures of Germany in our Photo Gallery…

Have you been to Emden in Northern Germany’s Ostfriesenland? Leave us a comment below.