A 30 minute drive out of Louisville, Kentucky will bring you to one of the many bourbon distilleries that Kentucky has to offer, The Jim Beam American Stillhouse.

Silke and I decided to make a small detour on our way back from Minnesota to Summerville, SC. Kentucky was very pretty this time of year, with the leaves turning different colors and the crisp cool air. What better way to stay warm than to hit the bourbon trail. Right? 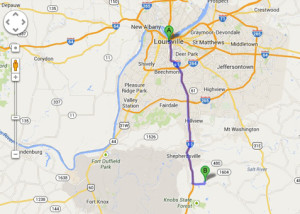 The drive south from Louisville didn’t take very long, it’s a very comfortable drive through a beautiful countryside. The big Jim Beam American Stillhouse sign by the road to welcome us was pretty hard to miss. 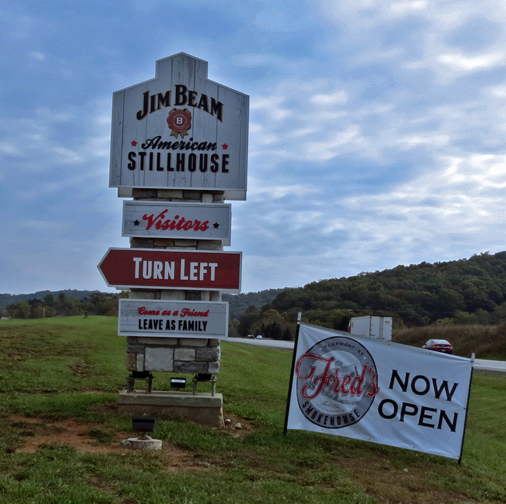 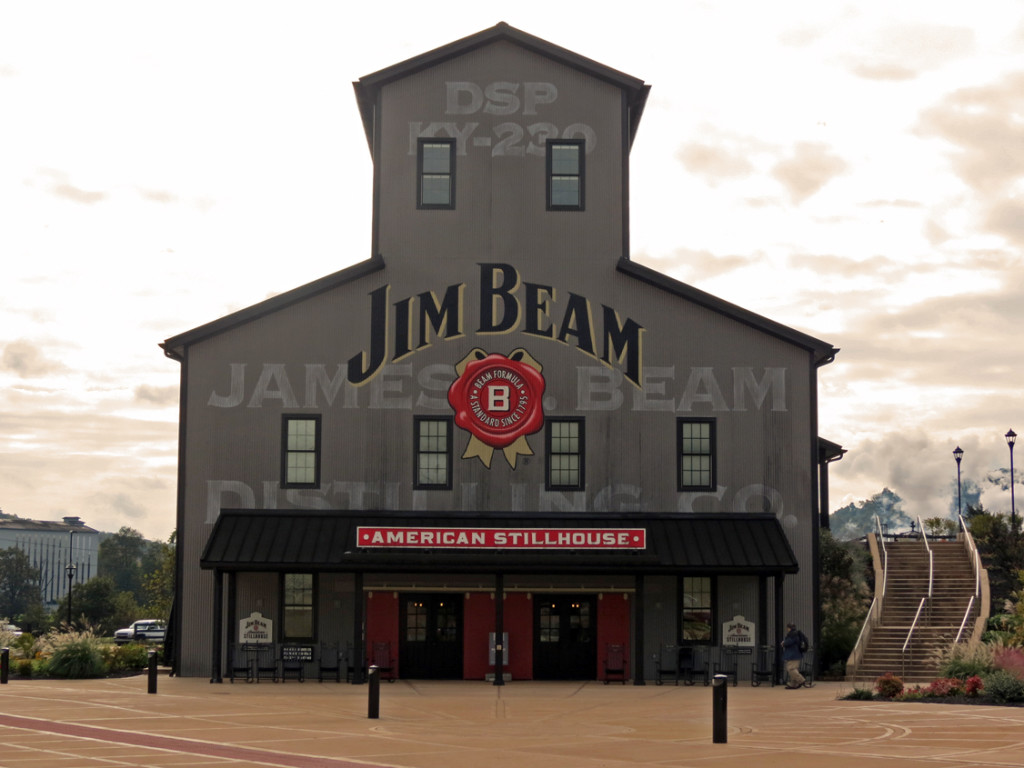 Once you’re inside the main building, the Jim Beam American Stillhouse, you are greeted by a tour guide who offers a time table for available tours and a quick layout of the buildings. Beyond this reception area is a pretty cool store that sells all the Jim Beam memorabilia anyone could imagine. From Jim Beam hoodies to t-shirts and playing cards to books and liquor, it was all there, with the Jim Beam label on it, for tourists to take home.

On to the Jim Beam whiskey tour. 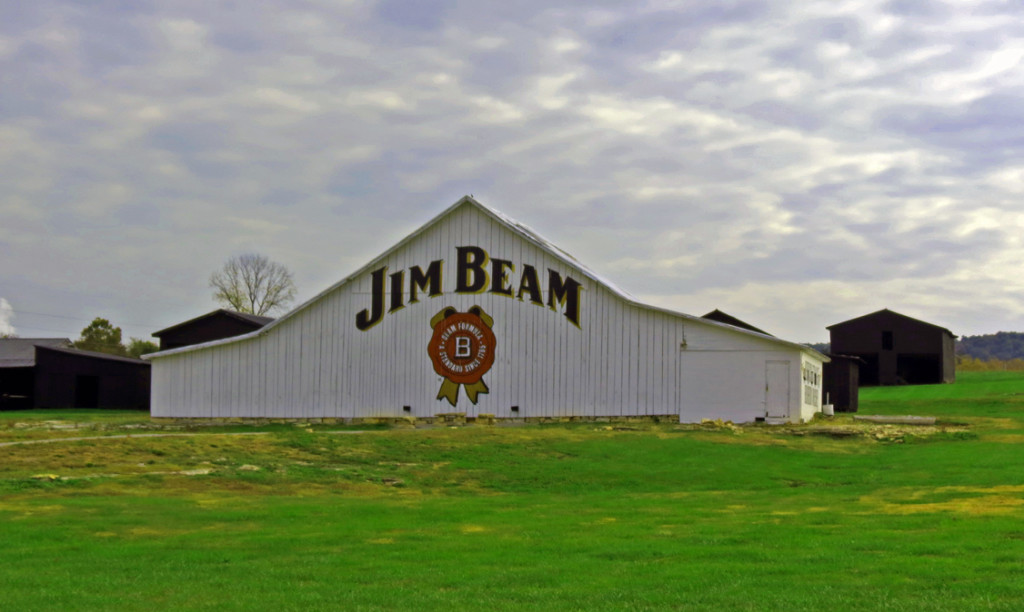 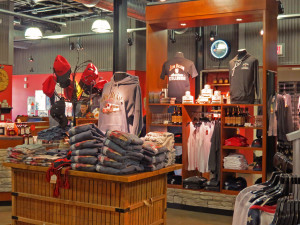 We had some time to kill before the Jim Beam whiskey tour started so we checked out the store and went to get something to eat at Fred’s Smokehouse. The BBQ sandwiches we had were reasonably good and decently priced. 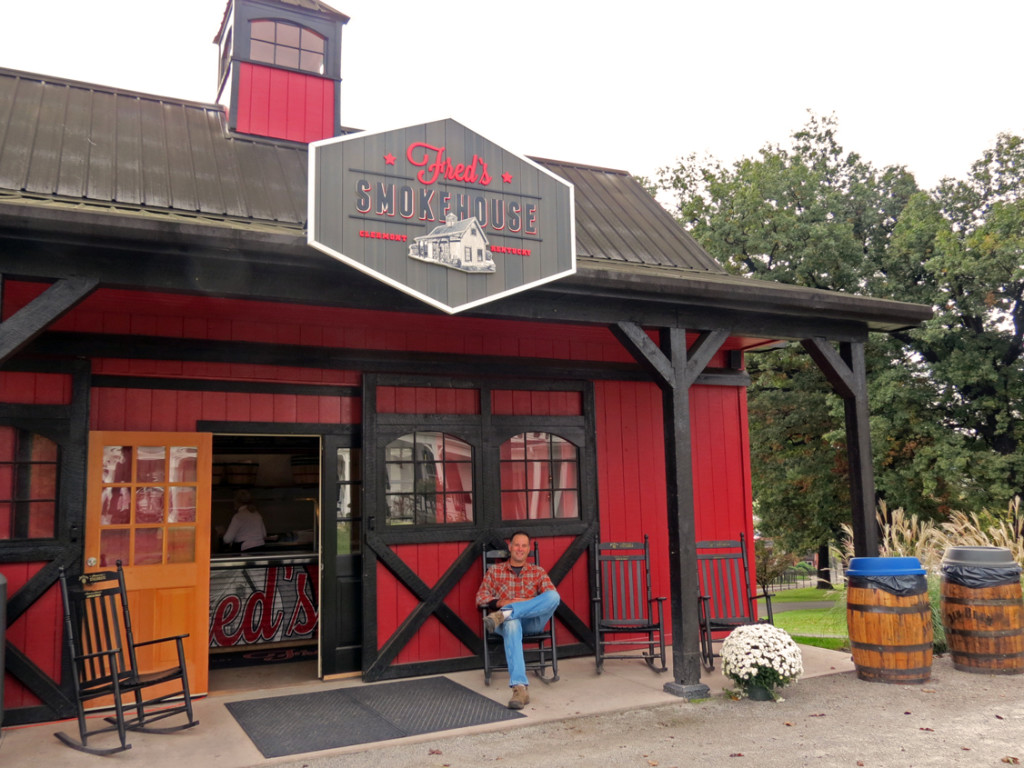 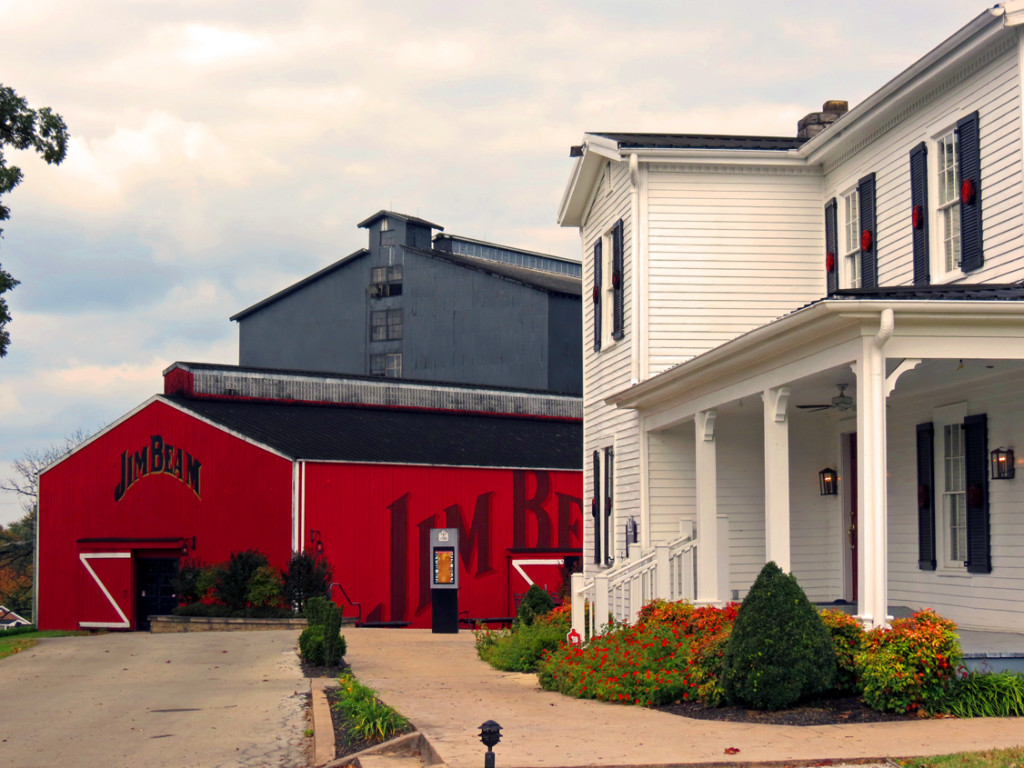 The Jim Beam tour was only $10 per person. It started out with an explanation of all the different grains that are used for fermentation. Everyone in the tour got to get up close to the equipment for a peek inside the fermenting equipment. Very interesting, especially if you’re a home brewer! 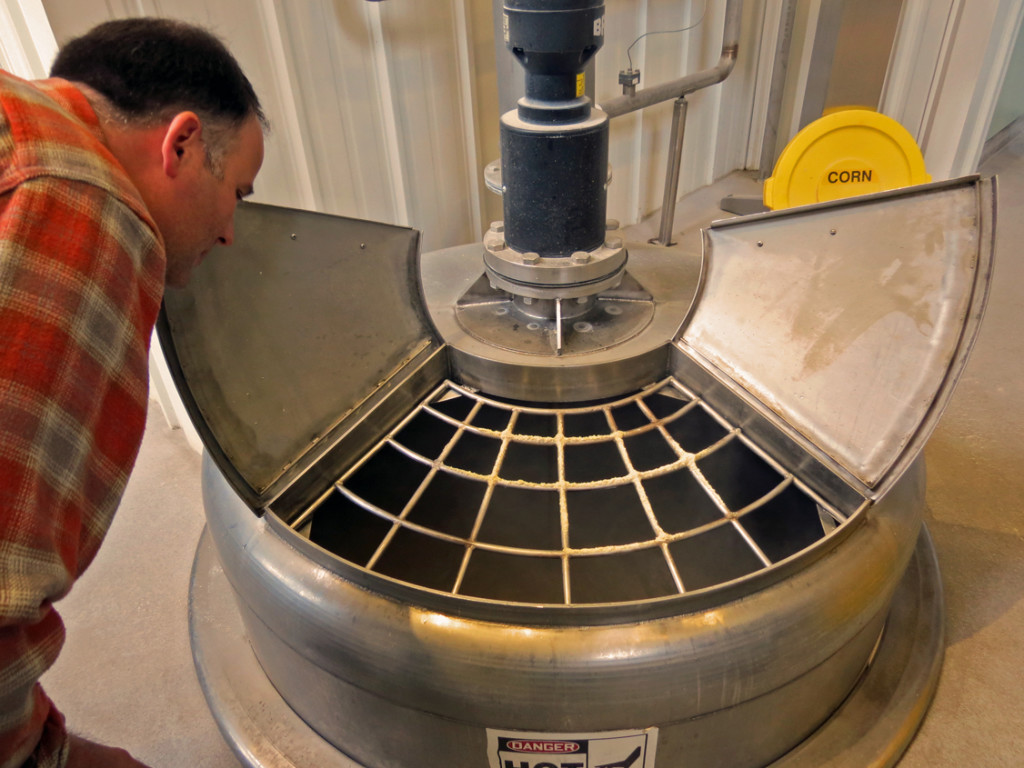 Where the magic happens at Jim Beams 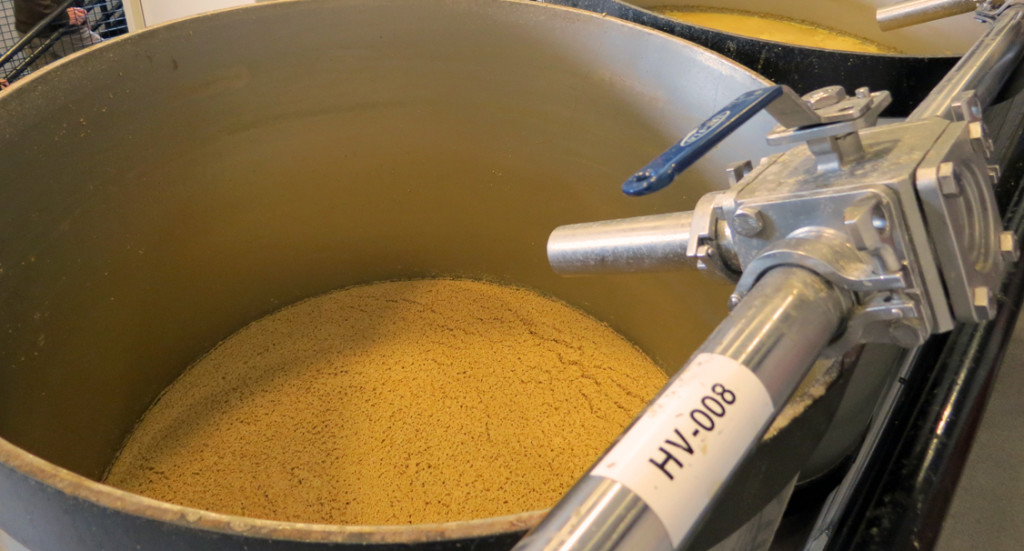 We marveled over the cut outs of all the ‘Jim Beam’ family members.

They could be found throughout the tour. Fred Noe, Booker Noe, David M. Beam and Jacob Beam are just a few of the cutout we saw during our Jim Beam whiskey tour. 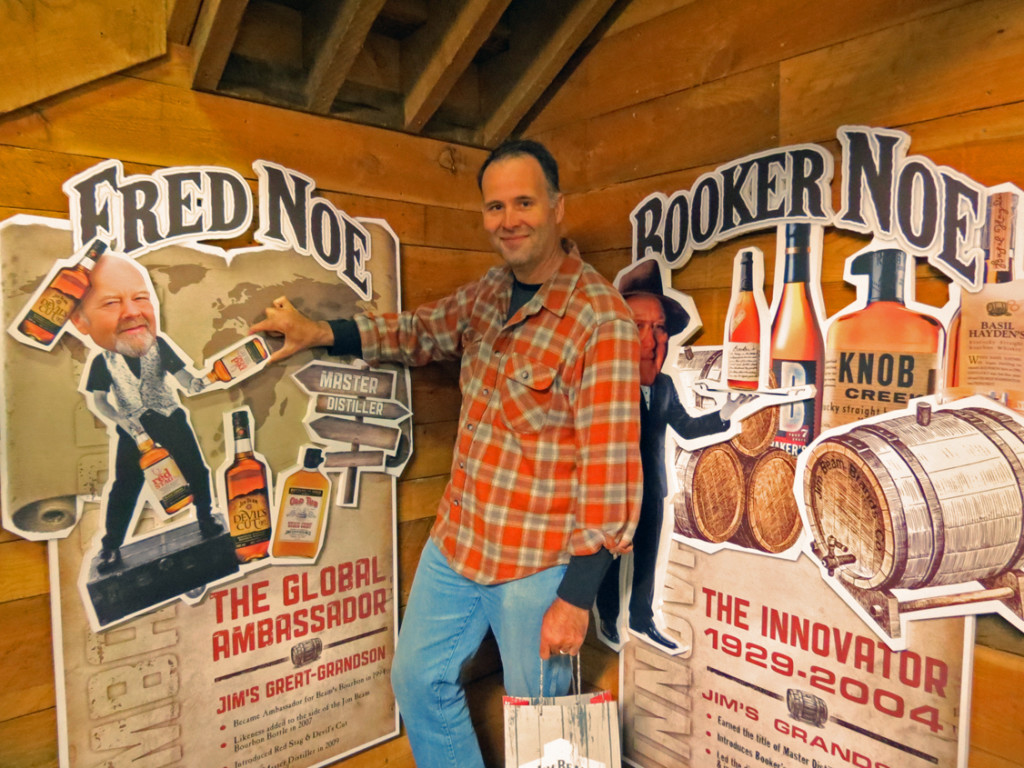 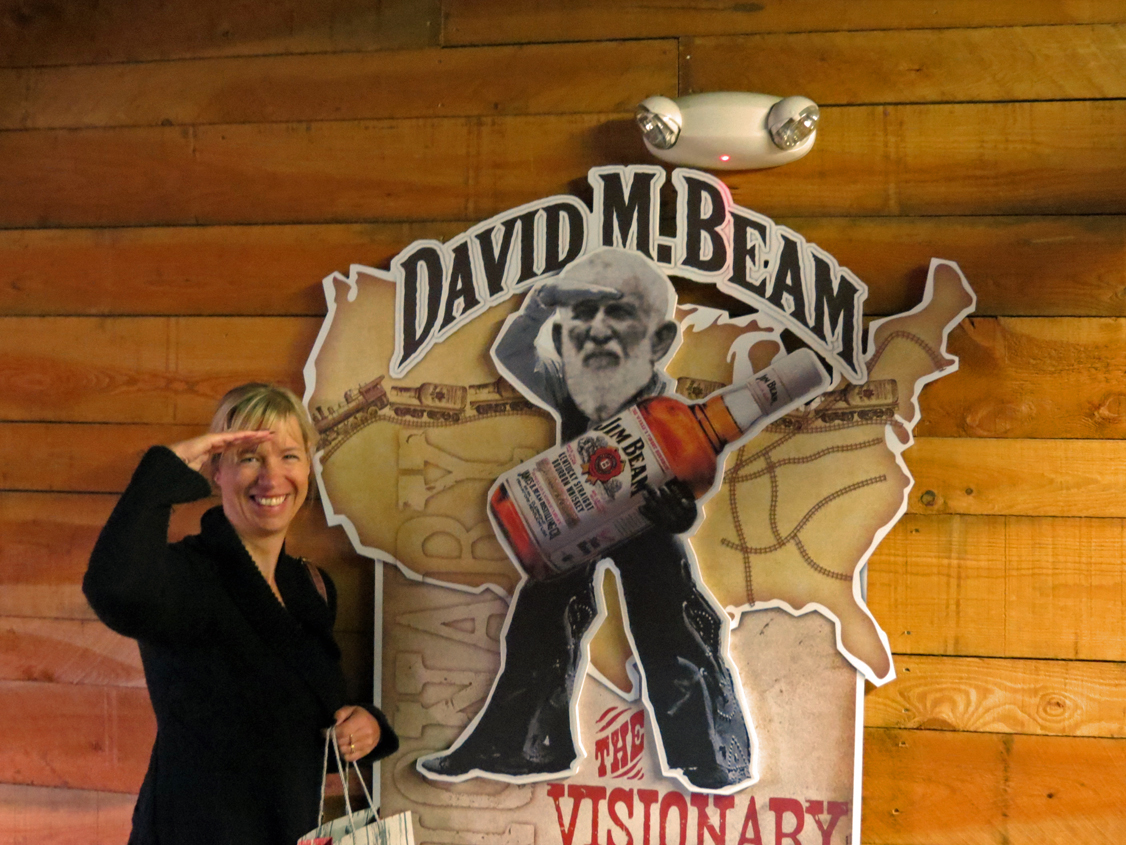 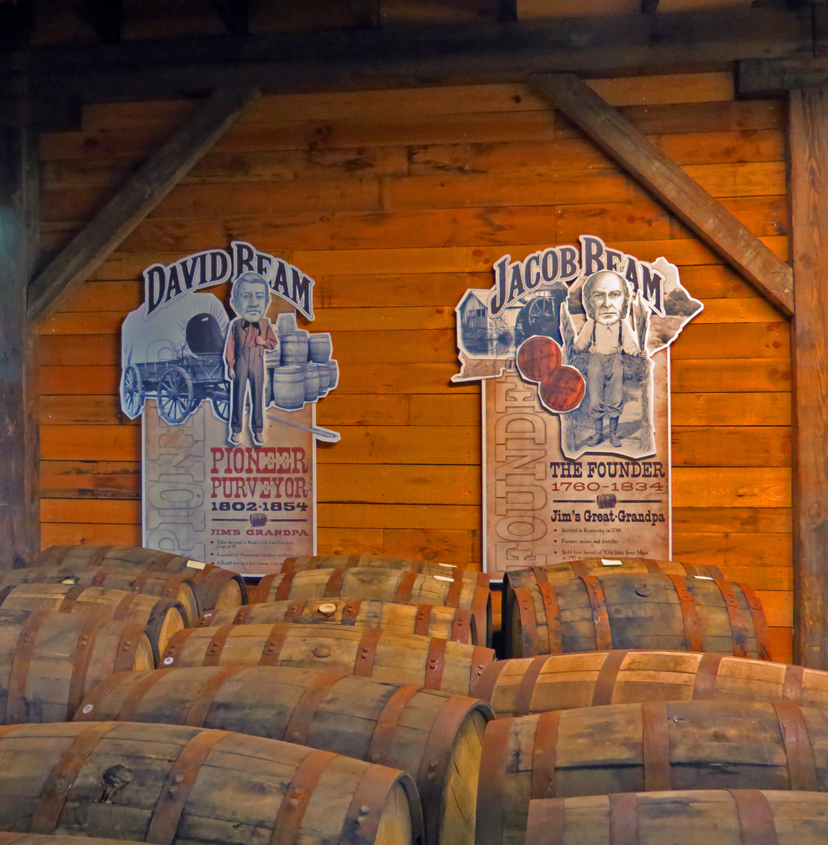 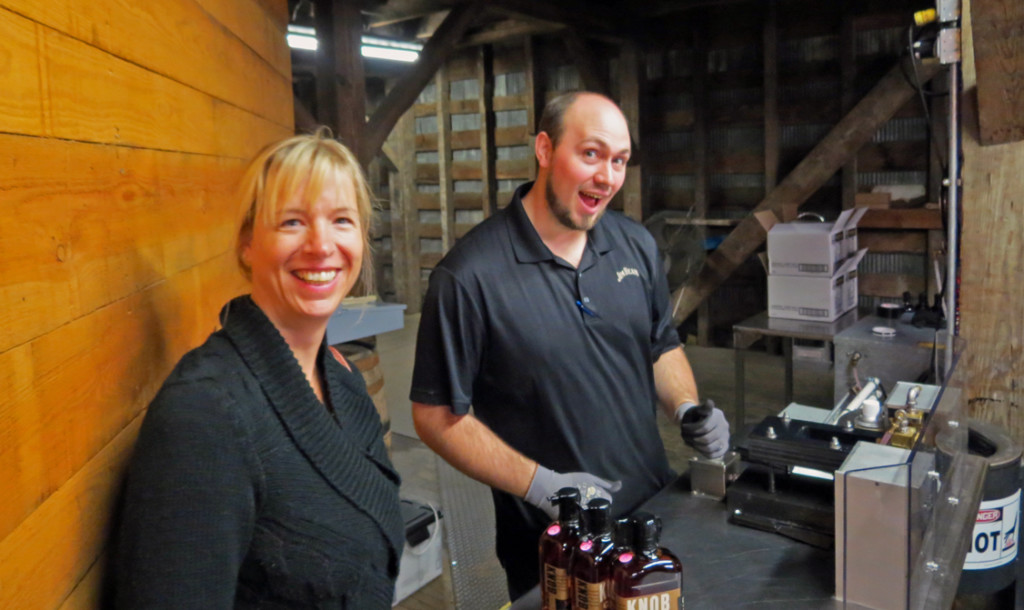 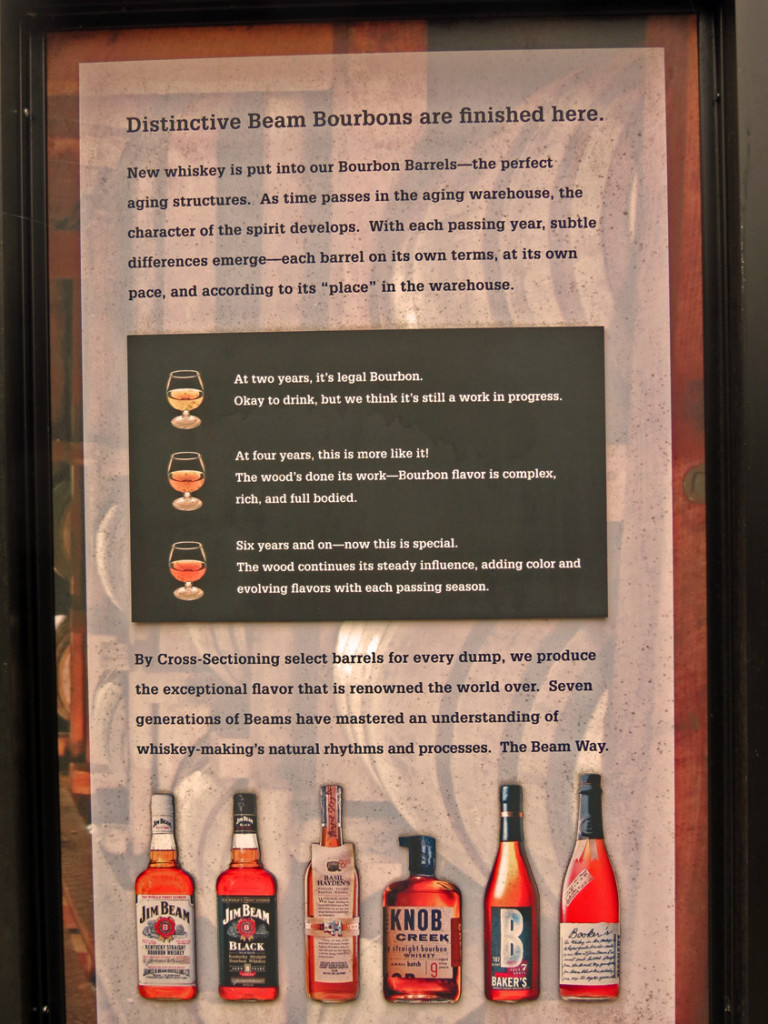 One of the coolest areas during the Jim Beam whiskey tour was towards the end.

We got to see the complete collection of whiskey decanters they had made over the years. I always remembered the Paul Bunyan one that my grandparents had in their basement. For Silke it was the Army helmet and boots that her parents still have in their liquor cabinet in Germany. 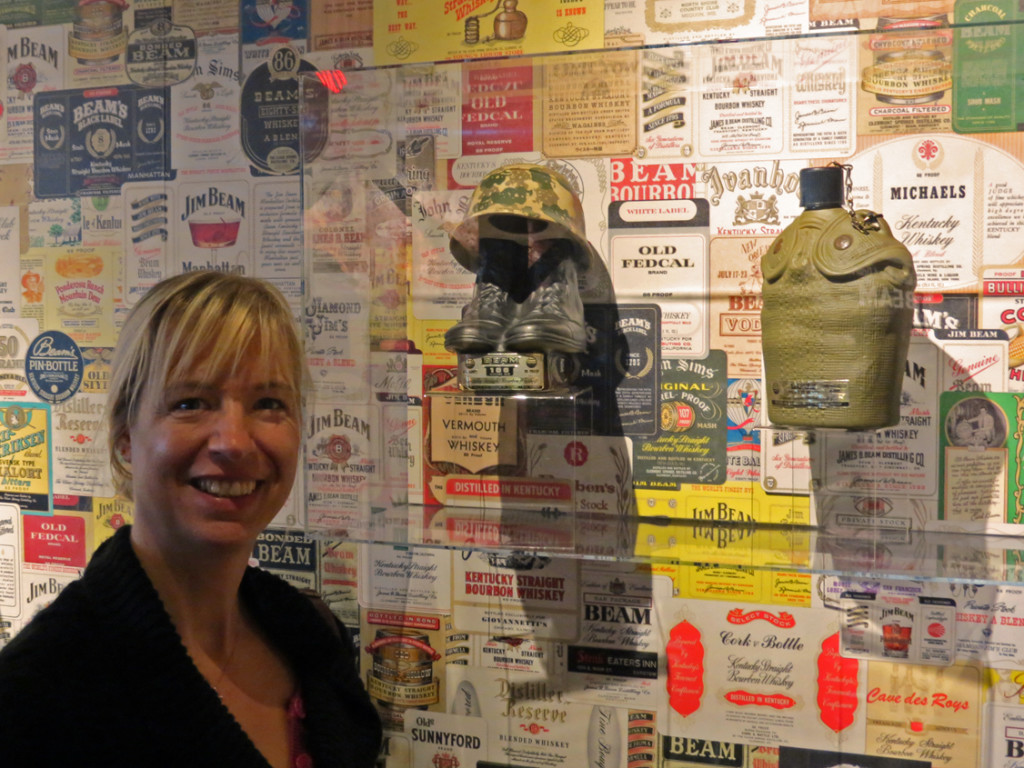 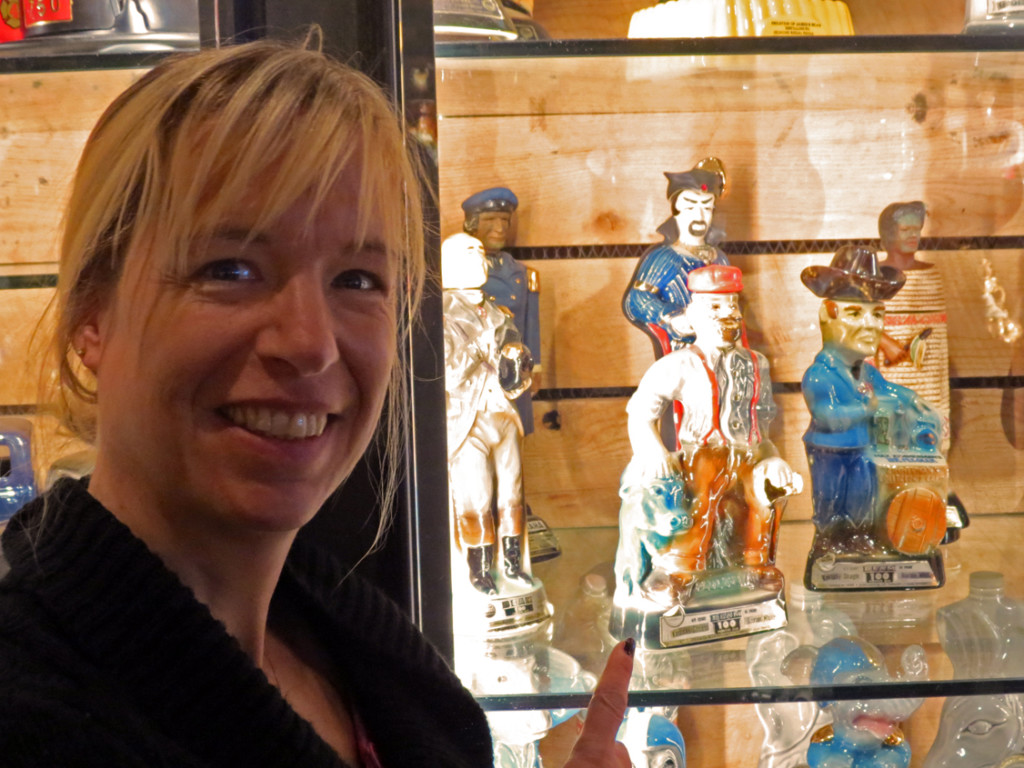 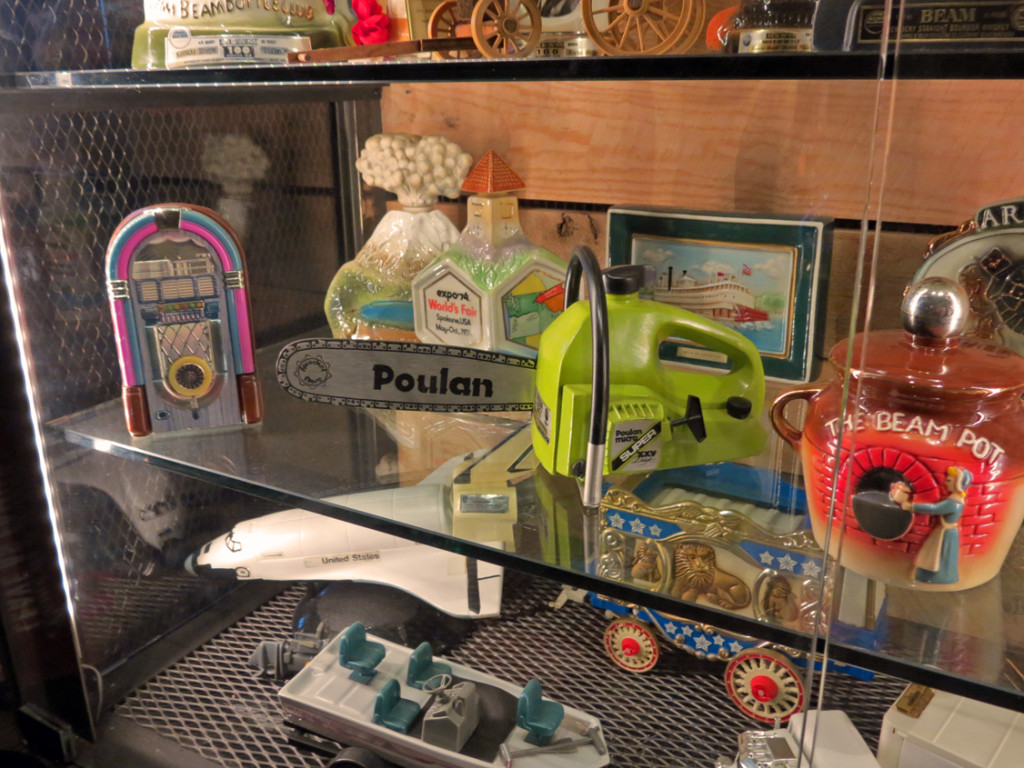 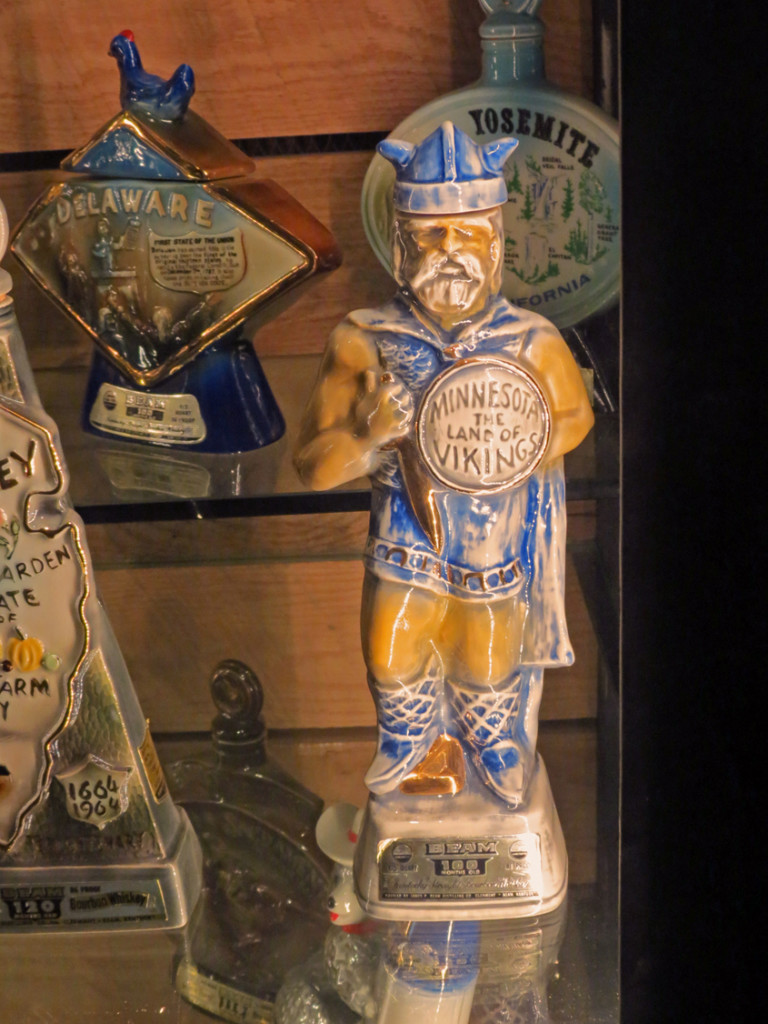 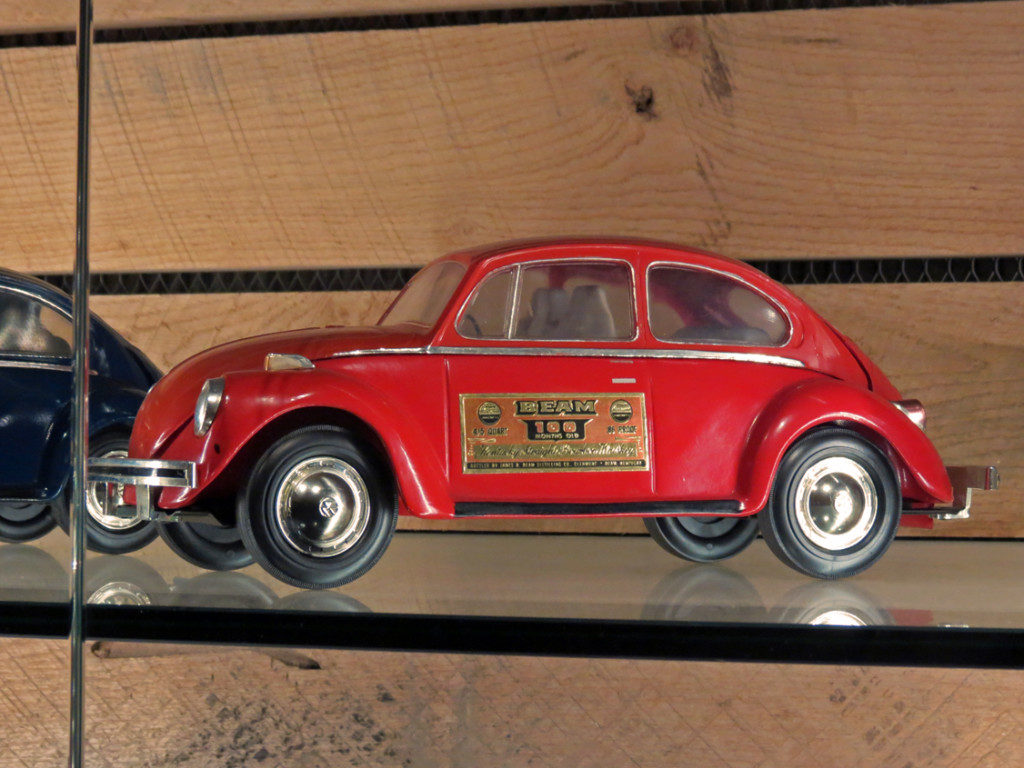 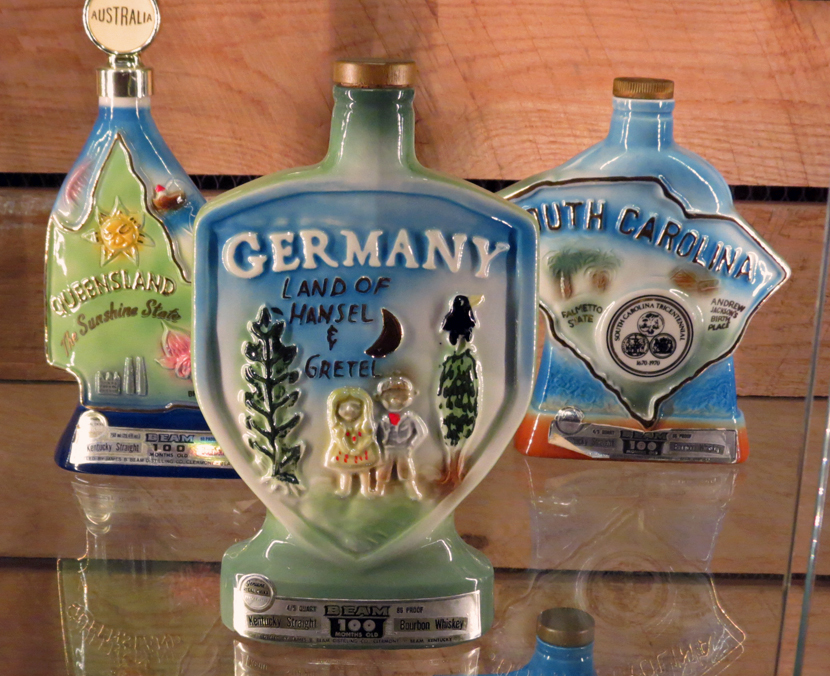 We had a very good time during the Jim Beam whiskey tour.

The staff and tour guide kept everything light and entertaining. If you ever get a chance to check out the Jim Beam Stillhouse Tour it will definitely be worth your time and you’ll be glad you did! 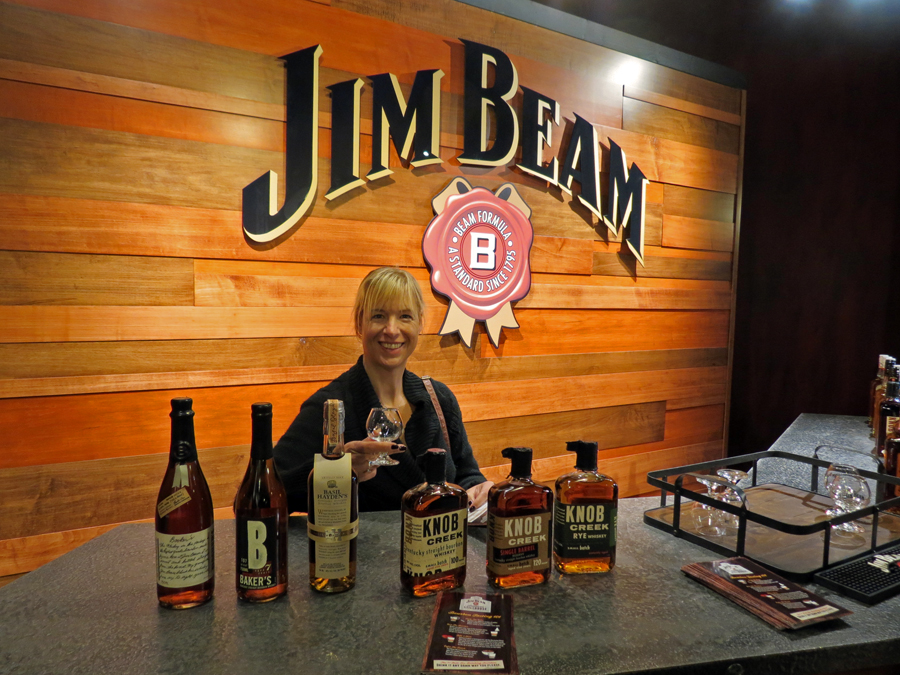 At the end of the tour we were handed a nice tulip shaped gift glass and a credit for two shots of our choice.

We thought this was the perfect ending to the 1 1/2 hour Jim Beam American Stillhouse Bourbon Tour.

Have you been on the Kentucky Bourbon Trail yet? What did you think of the Jim Beam whiskey tour? Leave us your comments below.