If you’re ever in the downtown Southern Pines, North Carolina, area don’t miss the opportunity to catch a movie or performance at this historic theater. Our latest house sitting job found us in the quiet little town of Southern Pines.

It may seem low key on the outside, but a hub of activity is taking place all around you. From food venues to wine and beer tastings, you will find something for everyone in this pleasant little slice of Americana. 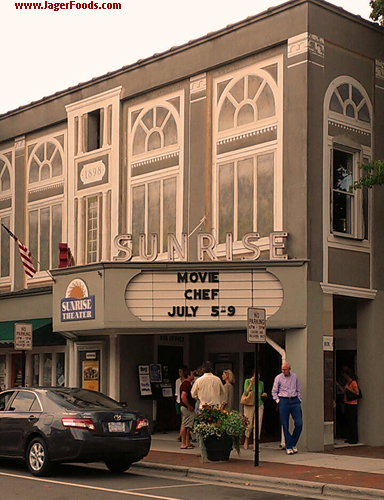 Movies like: Top Gun, Casablanca, Ferris Buehler’s Day Off, Gremlins, The Graduate, and even The Big Lebowski, show a diverse line up of entertainment. This historic theater in downtown Southern Pines, NC, offers movie goers with a showing of Independent films as well as the Met Opera Summer Series, Bolshoi Ballet and an upcoming Blues Festival fundraiser.

With beer and wine being served at the concession stand I knew we didn’t want to pass up on this experience. I had a bottle of Fat Tire served in a ‘Red Solo Cup’ for $4.00. I’ve never attended a movie where they actually served beer before so another day of firsts was in order. 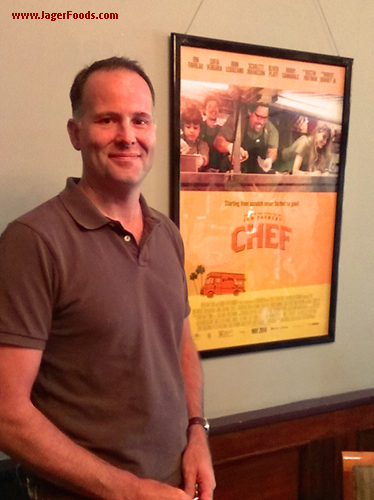 The movie Chef was playing and advertised that it had been held over due to popular demand. With an all star cast and using the moral majority consensus as a guide, we opted to follow the wave and check it out. Chef is a movie made for foodies with lots of delicious food scenes. A chef, played by Jon Favreau, loses his restaurant job and starts a food truck in an effort to reclaim his creative promise. During the course of the movie he rekindles his relationship with his young son and estranged wife.

The History of the Theater – ‘The Sunrise Theater is one of the pre-eminent entertainment venues in North Carolina. Born as a hardware store in 1898, it morphed into a movie theater in the 1940s. In more recent years it has become a performing arts center, offering multiple arts and Entertainment events for the Sandhills of North Carolina.’ Courtesy of the Sunrise Theater website 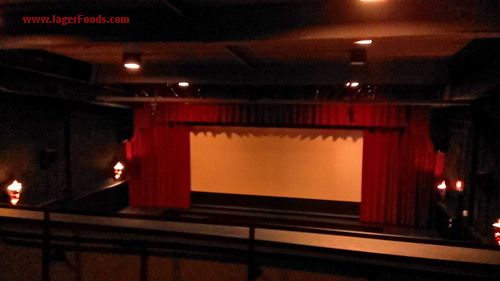 $8.00 a ticket will get you in to the Sunrise Theater to see a show. We were early enough to check the place out. This cozy little theater offers a more personal feel to the whole movie going experience.

The movie was applauded at the end which is something I’ve never experienced before. Silke had attended several movies before where they started clapping once it was over. Who is being applauded? If I went home and listened to a live performance music CD and was caught holding up a lighter to a ballad would I be sentenced to the funny farm? I guess the live theatrical feel of this theater carried over into the movie going experience for the audience. 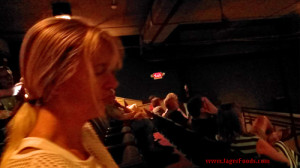 Our Sunday afternoon outing  was very enjoyable and I’m glad we went. The older films that play at Sunrise Theater go for only $6.00 a ticket. What I wouldn’t give to relive The Big Lebowski on a big movie screen one more time.

Do you have a favorite movie theater where you live? Leave us a comment below.