How To Make Beer With Mr Beer’s Home Brewing Kit.

For my last birthday I received a big box from my sister Stephanie in the mail. I was more than excited to find it contained the Mr Beer Homebrewing Kit wrapped in a big blue Amazon gift bag.

A home brewing beer kit has been on my wishlist for a long time.  We will start our beer making adventure with the Mexican Cerveza (the kit also includes a can of Grand Bohemian Czech Pilsner). All the equipment in this beer making kit is completely reusable and each Mr. Beer Refill is all natural, GMO free and will produce a beer that is approximately 3.7% ABV. Scroll down to see step by step instructions with photos… 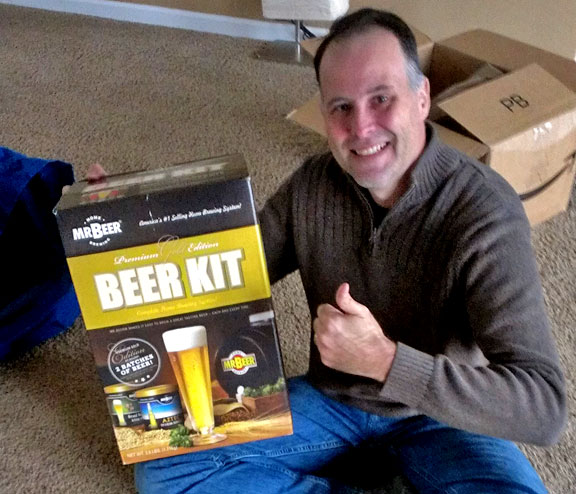 Silke and I have toured several different breweries in the past. We visited brew rooms from the big century old establishments like Leinenkugels in WI to small start-up micro-breweries like the Steel Toe Brewery in Minneapolis, they use some pretty cool homemade equipment.

The whole beer making process has always intrigued me and now, with the help of Mr Beer’s Home Brewing Kit I will get to experience it first hand. 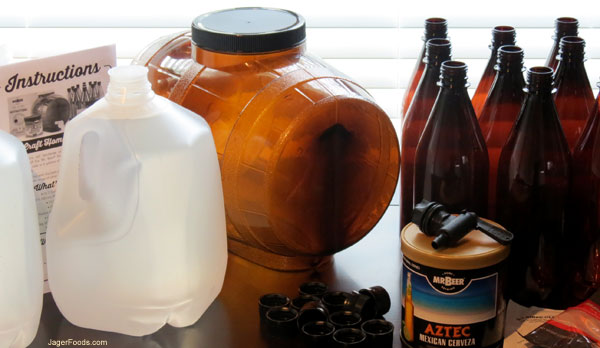 The DVD took me through the step by step process of what I needed to do in order to create proper tasting beer. I think I watched it at least 7 times (probably more) before I felt comfortable starting the actual beer brewing process.

By the time I’m able to crack open my first beer I will have a lot of time invested. It’s a lengthy process and I wanted to make sure I did everything right. To brew a homemade beer it takes a minimum of 6 weeks or longer from start to finish.

One of the most important parts of the home brewing process is to have a clean work environment. A tiny amount of bacteria in the brew can ruin the flavor of your beer. Who wants to spend six weeks waiting for a beer only to find out it tastes like slough water? I was thrilled to get started right away, so I ran out to buy 3 gallons of filtered water and after thoroughly cleaning our sink, counter-tops and my hands I was ready to brew my first batch of beer.

How To Make Beer At Home

The Mr Beer Home Brewing Kit includes everything you need for your first two batches of beer.

Assemble the beer barrel by installing the spout in the front and fill it about half full with warm water. Check to make sure you don’t have any leaks.

Dissolve half of the cleaning solution, included in the kit and swirl the beer barrel to clean entire inside surface. Hold upside down over the sink to cover the inside of the lid. Let sit for about 3 minutes. 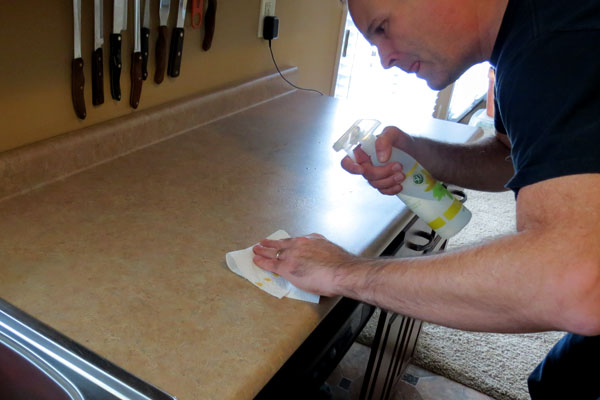 Nick’s Getting Ready To Brew Beer

Get a large bowl, a can opener, a measuring cup and a large plastic spoon (we never used the whisk in the picture). Empty the beer barrel through the spout into the bowl making sure your can opener and spoon are covered in the no-rinse cleaning solution. Let sit for another 3 minutes or so.

Don’t rinse the barrel or your utensils. 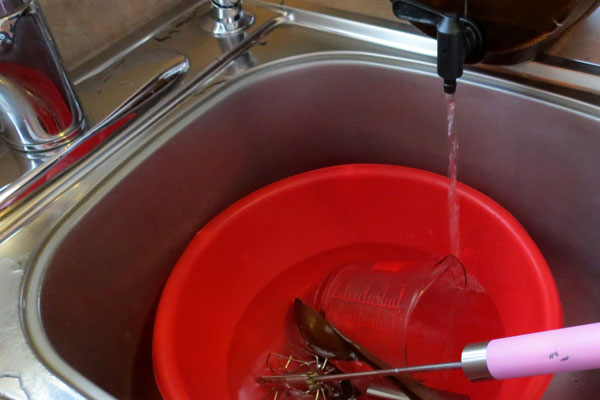 Take off the top of the beer making flavor can and remove the brewing yeast package. Now place the can in a sink or pot of hot water to soften the concoction inside. 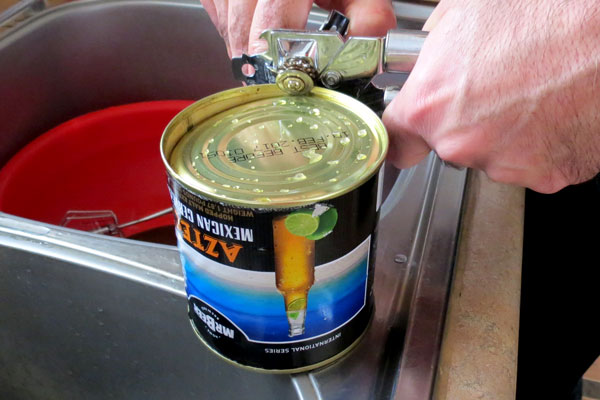 Using a large pot measure four cups of water and bring to a boil. 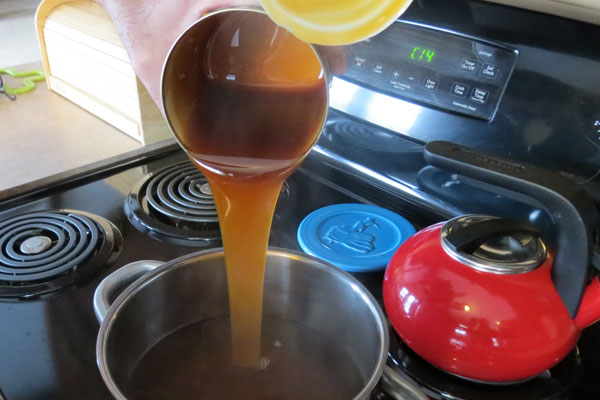 Remove the water from the burner and slowly add the flavor can, stir until completely dissolved. This is called the wort.

Add fresh water to the beer barrel up to the first line. Add the warm flavor mixture (wort) and then fill the barrel with more water to the second line. Stir until the mixture is well blended together. 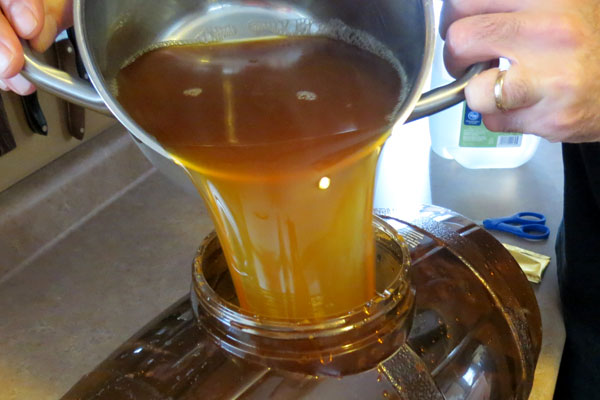 Pouring The Wort Into The Beer Barrel

Sprinkle the included package of yeast into the barrel. Don’t stir the mixture at this point! 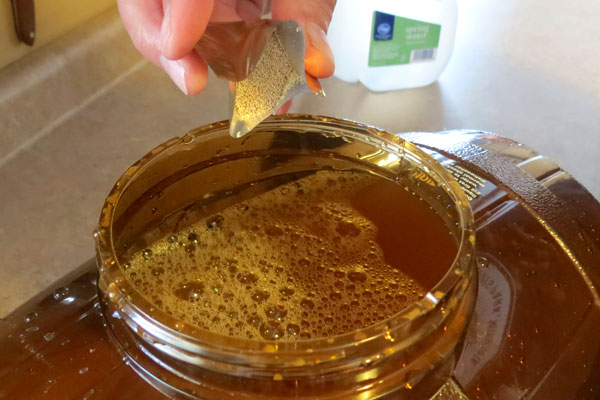 Adding Brewers Yeast To The Wort In The Beer Barrel

Now its time to find a temperature controlled place to let your beer do its thing for the next two weeks.

After placing a label with the brew date on the barrel I used a large 48 quart cooler to store the beer at an even temperature. Now we have to wait for two long weeks until the fermenting process is complete. 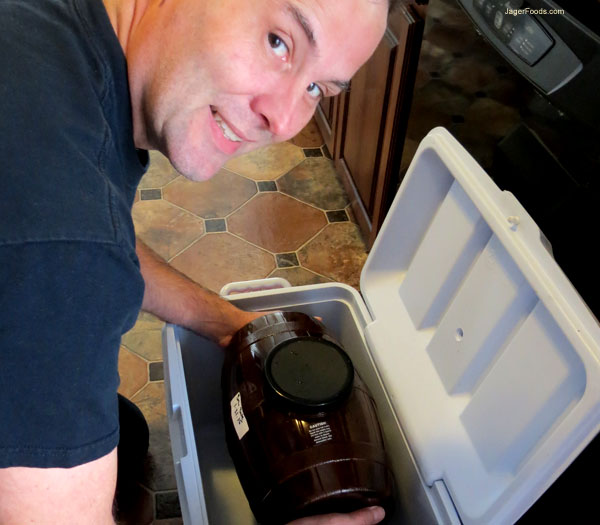 This was a really novel gift and I haven’t thanked my sister enough for it yet. At times I feel like I’ve gotten a home chemistry kit and I’m experimenting with controlled results. Let me be clear about something: I have no intentions of starting my own brewery. If I got anything out of this experience it would be the appreciation of the time and effort that goes into making beer.

It would be cool to play around with different beer flavors, find one that everyone enjoys and submit it to an actual brewery. Who knows, maybe I’ll find something that actually gets made. My small contribution to the brewing community. You can use this kit to brew your own hard cider as well.

In the second installment of our beer brewing adventure we show you how to bottle & carbonate the beer. I will also share my first tasting impressions:

Have we enticed you enough to start brewing your own beer? Leave us a comment below.