Peeling Potatoes In A Hotel Kitchen

There’s a lesson to be learned in this kitchen story.

As part of my management apprenticeship in Germany many years ago, I needed to work several months in each department of a large hotel.

I started out in the restaurant serving customers for the first 6 months. I learned how to filet baked trout at the table, which wine goes best with which meal, how to pour a proper German beer and all the ways to beautifully set a dining table and fold napkins, among other things.

My next assignment was to work in the hotel kitchen, commanded by a most formidable Chef.

By this point I have already worked with the kitchen staff on a daily basis. As a waitress you always want to try and stay on the cooks good side, in case you make a mistake and need to re-order or fix a plate. I thought the guys and gals in the kitchen liked me alright, so I felt pretty confident about starting out my kitchen routine.

To my dismay, as soon as I showed up that morning I was given a knife and a huge bucket of dirty potatoes. 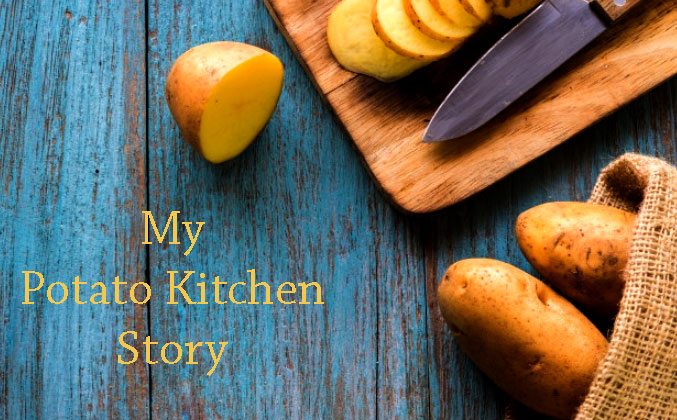 I was told to start peeling raw potatoes. Every time I finished a bucket of potatoes another one would be placed next to me.

This is not what I hoped for, but I worked without complaining and continued to peel, cut and slice potatoes for two straight days. I started getting blisters from holding the knife. My hands were wet all the time and I was more than sick of smelling dirt and having potato juices run down my forearms.

Every once in a while I would catch one of the cooks looking at me with a sly smile on his or her face. I just smiled back and re-focused on the potato at hand. Eventually I ran out of potatoes and was assigned to a different task in the kitchen.

It wasn’t until several weeks later, when a new cook apprentice started that I found out the potato peeling assignment was a test.

The more the person being assigned to potato duty complained, the harder the rest of the cooks would make the poor schmucks life in the months to come.

Unfortunately, the new guy was very outspoken and let everyone know how much he hated peeling potatoes with a knife. Needless to say his first several months in the kitchen where hell for him. He got all the assignments nobody else wanted to do, from washing dirty dishes and floors to rearranging the huge walk in freezer.

The lesson here is… Do everything without complaining and arguing, so that no one can criticize you.

On my last day working for the kitchen department, before moving on to work at the hotel reception, the Chef ordered me to step into his tiny kitchen office. To my surprise he asked me if I would like to switch my apprenticeship from hotel management to becoming a chef.

I often wondered how my life would have played out if I had taken my Chef up on his offer.

Do you want to know another lesson I learned from this experience many years ago? The value of a good potato peeler!

Many large hotel kitchens now have a potato peeling machine that works pretty slick. You throw the dirty potatoes in the top of the machine and out come clean, peeled potatoes ready for the cook pot. Of course most of us don’t need to peel tons of potatoes at one time.

These days I don’t peel potatoes with a knife either, instead I use a proper potato peeler by Kuhn Rikon. This peeler is one of my favorite kitchen tools and I use it all the time.

I have several of the Kuhn peelers in my cupboard since they come in different colors, green, yellow, orange, blue, white and black. This peeler is ultra sharp, ergonomically correct and effortlessly peels a variety of fruits and vegetables. I give peelers as house warming gifts and even brought my orange potato peeler with me to our care taking job in Hawai’i.