Do we really need an artisan KitchenAid Stand Mixer?

That questions has been brought up several times now. Actually, we ask ourselves this question every time we see a stand alone mixer in a department store.

Our kitchen has been a work in progress for quite some time now. The cupboards were stuck in limbo land, we were trying to brighten the place up by painting them a lighter color. Halfway through the project the holidays came and left the kitchen in a state of some kind of three tone mix. The one thing that was accomplished was adding more counter space. It was desperately needed! For as much extra counter space that we added, we are still a little reluctant to add more appliances.

With 30+ different color options a KitchenAid Artisan Mixer is just too cool not to have.

The standard coffee pot, toaster, and microwave have claimed their spots along with a water boiler. With space being at a premium, we really don’t want to add anything too big and bulky. That said, there are some things that you really don’t want to live without, right? And this mixer is one of those items!

This stand mixer is a culinary center with more than 15 optional attachments. 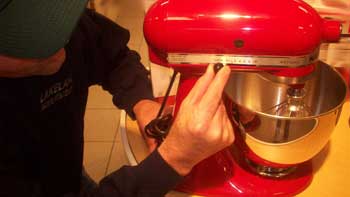 Measuring in at 14 by 8-2/3 inches the 5 quart KitchenAid Artisan Stand Mixer is definitely an appliance that will take over your counter. The power that runs this unit makes it a substantial piece of equipment that will make any mixing job a snap in no time. 15 inches tall, you really need to keep it in an open area unless you plan on sliding it out from underneath the kitchen cabinets whenever you’re operating it.

With multiple speeds you’ll easily be able to find your perfect balance when bringing your ingredients together. This 5-quart stand mixer tackles nearly any recipe without knocking around on the counter, and it’s one of the quietest models in the KitchenAid line.

The Kitchenaid won Best Stand Mixer from ‘The Sweet Home‘.  For this update (11/2016) we looked for new models that could compete with the Artisan, but ultimately we found that it’s still the absolute best for its performance, versatility, and price.

A Stand Mixer With Style. This thing just adds a certain element of panache to your kitchen. With numerous colors to chose from, you will not only be adding versatility to your cooking and baking but a certain air of authority to your kitchen as well.

We’re not going to open a bakery any time soon. But isn’t any job made easier if you have the right tools?

Do you own a KitchenAid Artisan Stand Mixer? Let us know what you think below.