Paying Your Bill On-line, Yes or No?

We were planning on being gone for awhile and it only seemed like the right thing to do. Set up all of our bills for automatic payment. Who knew this would get so complicated? It was a few weeks before we were to leave for our house sitting job in Belize and I went out of my way to set up on-line bill pay. Our Time Warner Cable (TWC) bill was all set up and it was put on the back burner.

Fast forward to Belize and I lost my debit card. It took one phone call and the card was blocked. No muss, no fuss. The little bill that I had put on the back burner started a slow burn that turned into a 3 bar fire. Not only had the bill not been getting paid but the company took the next step and disconnected our service. No phone calls or e-mails, just a straight disconnect.

This got the attention of the current tenants of our residence. They were paying to rent our place and the internet was included. We were still out of the country and we asked the rental manager to go over to the local Time Warner Cable office and settle the bill. At least our tenants would have cable again. TWC sent out a technician and for a ‘nominal fee’ it was hooked up again.

Read on to see how this turned into a nightmare…

I wish I could say that this was the end of the story but this is where the back burner bill that turned into a fire was now consuming the whole building and threatened to take out everything.

The next month, when the bill was due, TWC decided to run the very card that I had set up the bill pay on. Yes, the one that I lost in Belize and had canceled. I think you see where this is going. It was automatically rejected and now not only was the bill not getting paid but we were getting a service fee for a bounce back on the card. The fees and the bills were accumulating. Still, no warning from Time Warner Cable.

The routine e-mail came that our next bill was due. I’m reading this e-mail in a neighboring library from the camp ground in South Carolina. By this time we were back in the country from our house sitting job in Belize and waiting to be able to move into our house in Summerville. After reading the e-mail I logged into our TWC account and proceeded to pay the bill. Couldn’t do it!

“Please contact us regarding your payment” was all the further I could get. 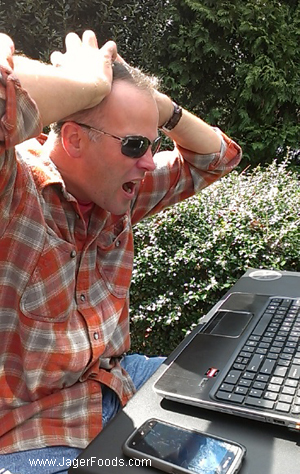 Nick is getting very frustrated

TWC phone line a.k.a. ‘No Man’s Land’ – This was the beginning of a whole new nightmare. The automated system that’s installed to help you wasn’t getting us anywhere. I ended up speaking to three different people within a 45 minute time span and was consistently given the run around.

What it came down to was we had to physically walking into a TWC office only to pay the bill.

No phone bill pay, no on-line bill pay. A written check was required to make everything right with the world. The nearest office was in Charlotte, North Carolina. This is a 45 minute drive from the camp ground we are staying at.

We drove all the way over and told our story for the fifth time this day. It was getting old and not just for us. The teller’s eyes kind of glazed over as soon as we started talking about being out of the country and not being able to pay the bill. So much for finding a sympathetic ear. I wrote a check and everything was taken care of. The teller said that the card was removed from the account and that it would take three days and the bill block would be lifted so that we could then once again pay our bill on-line. I actually thanked her for this?

Aside from getting ready to find a new internet service provider I was left to wonder what other bills I had set up this way and what other pitfalls lay ahead. Silke informed me that all the other bills were set up to come out of our checking account and not a Debit card. So was this my fault? I set it up wrong? It would seem that a better choice of action would have been to make some calls on my end to ensure that all of our bills were being paid.

That’s the funny part about online bill paying. The bills were all getting paid. If a debit card is rejected or outdated the company usually sends the customer an e-mail to at least inform them that there was an error and gives them a chance to correct the problem. No e-mail, no nothing.

Aside from the lousy customer service that Time Warner Company provided I’ve now checked to make sure that all of my automatic bill payments are set up correctly and no further issues will arise.

Have you had a similar bill paying situation? Feel free to sound off in the comment section below. It will make you feel better once you have it off your chest.

8 Responses to Paying Your Bill On-line, Yes or No?