Our Toaster Was A Major Fire Hazard

You might be in the market for a new toaster, even if you clean your toaster.

The other day Nick, my daughter Tanya and I were in different parts of the house when I heard the words: “Mom, hurry, there’s a fire in the kitchen!” Nick and I arrived in the kitchen at the same time to see flames shooting out of the toaster. The plug was between the toaster and the wall so it wasn’t just a matter of pulling out the plug.

After shutting off the power at the breaker box, we let the flames subside and proceeded to throw the toaster out in the front yard to prevent more smoke from filling the house.

Here is a picture of most homes #1 fire hazard! A Toaster… 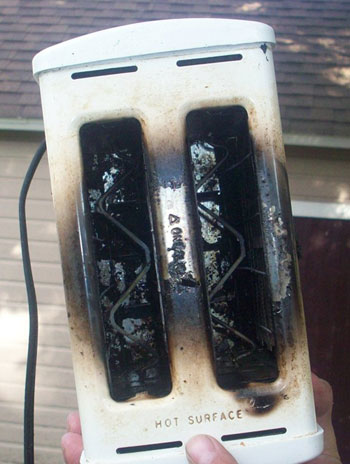 I can’t exactly say how old this piece of kitchenware is, but I would say less then  three years old.

No debris was found clogging it up and it was regular pieces of toasting bread that we’re being toasted at the time of this incident. I clean the toaster every so often by shaking it upside down over the sink. We went into a lengthy discussion about leaving the toaster unattended while toasting, which went on for the next 30 minutes or more. Still… nothing was really resolved from it.

It just goes to show that you never can tell when something bad might happen.

On to something bigger and better, i.e. A New Toaster.

We didn’t want history repeating itself so we looked for a toaster that was a little more upscale and easier to clean. 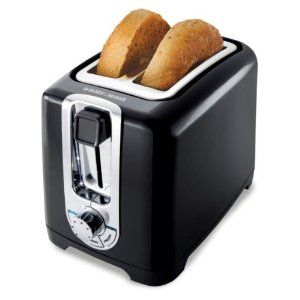 That’s right. A removable crumb tray so you have no excuse to let things begin to collect in the bottom. Economically priced and extra wide slots allow for everything from regular bread to Texas toast to be toasted. We’ve had this toaster for over a month now and we have no complaints.

Are your appliances old and outdated enough to become a fire hazard? It might be time to invest in newer equipment. You’ll be getting a more energy efficient appliance and peace of mind.

How often do you clean your toaster? Leave us a comment.

2017 Update: We still have the Black & Decker toaster and use it on a regular basis. It toasts bagels and bread equally well and we haven’t had any issues with it. The removable crumb tray is great, making clean up so much easier. This was a really good buy for under $20.

16 Responses to Our Toaster Was A Major Fire Hazard