Before we get into the ocean creatures, let’s learn a little bit about the earth’s ocean first. The ocean covers 71% of the Earth’s surface, the equivalent of about 36 USA’s, and contains 97% of the Earth’s water. Did you know? Oceans are not just vast bodies of water. They actually contain lakes, stream and even rivers. This occurs when salty water and hydrogen sulfide combine to form a brine that is heavier than regular seawater.

The average water temperature of most oceans is 63° F. Except the Indian Ocean… which can reach a temperature of about 86° Fahrenheit. What about all that salt you ask? If you gathered all of the salt from the ocean waters and spread it out evenly on the Earth’s surface, assuming the Earth was flat, it would completely cover the Earth in a 500-foot thick layer.

Volcanoes can occur on land and in the ocean, like you can see on the Big Island of Hawai’i. In fact, up to 80% of erupting volcanoes occur in the oceans, below the surface area. They can spew molten, hot lava and the surrounding water can reach a mind boggling temperature of 750° F. 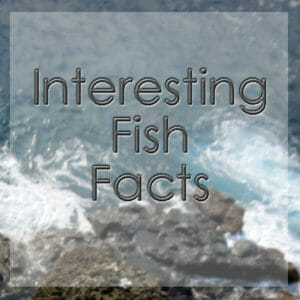 Many fish can change their gender during the course of their lives. Some even obtain both male and female organs. A newly hatched fish is called a “fry” and unlike humans, fish can swim at amazing depths. A fish swimming at 15,000 feet (3 miles down) can withstand a pressure of 7,000 pounds per square inch. They do this by pumping gas into a swim bladder. Similar to a tree’s rings, a fish’s scales tell their age.

One of the most unusual-looking fish is the Barreleye fish. Although it appears to have its eyes on the front of its head, the eyes are actually located on the inside of its head and point upward to see fish pass by overhead. But how can they see if their eyes are on the inside? Well, it’s because their heads are transparent! You can see right through to their brains. 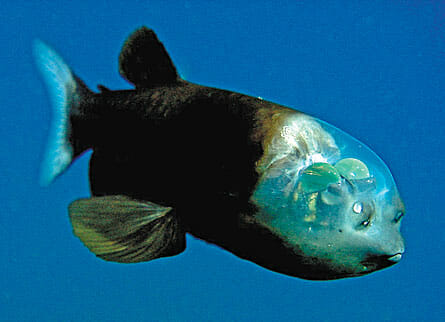 Barreleye Fish with see through head

The deep sea Angler fish is quite the peculiar fish as well. It gets its name from the elongated dorsal spine that holds a light-producing organ known as a photophore. The fish uses the light to attract smaller fish. It remains motionless as its prey comes closer and closer, then snatches it up.

The Angler fish has a jaw and stomach that extends to an incredible size, this allows them to swallow prey twice its size. Although it has a viscous appearance, the deep sea Angler fish is only 5 inches long. The deep sea angler fish habitat is believed to be about 3,000 feet (914 meters) below the water surface. Learn more about the Angler fish’s habitat.

The male Angler fish is much smaller than it’s female counterpart, about the size of a small finger. It’s unable to digest food once it reaches adulthood. Therefore it will die unless it can find a female Angler fish to attach itself to. He will bite her, becoming permanently attached to her and act as a parasite. 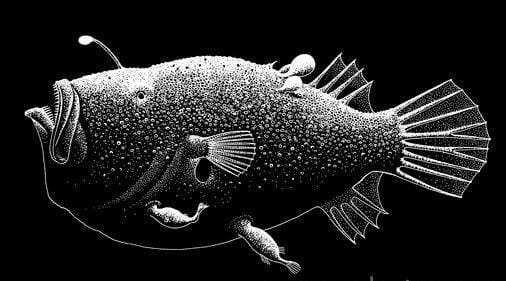 How many adult males can you count on this female Angler Fish?

Monsters Of The Sea

Blue Whales top the list of giants in the ocean. It’s the largest animal on our planer EVER! It exceeds the size of the greatest knows dinosaurs and has a heart the size of a Volkswagen. Blue Whales can weigh as much as 32 elephants and their babies weigh about three tons at birth. 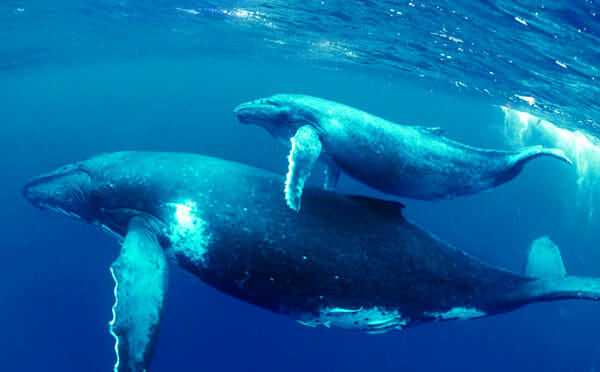 An adult Blue Whale can measure up to 100 feet!

Coming in as a close second is the Fin whale, reaching an impressive length of about 82 feet in length. Another giant of the ocean is the Colossal Squid which can reach a length of 45 feet and a weight of approximately 1,650 pounds. It also has the largest eye in the animal kingdom, measuring about 16 inches in diameter.

Jellyfish with its gelatinous bodies and painful stings can be scary enough, but just imagine one that is over six feet in diameter! The Lion’s Mane Jellyfish can get to 6.6 feet around with a ‘mane’ or tentacles that spread out over 49 feet long each. For comparison, a regular school bus is 36 feet long.

Lion’s Mane Jellyfish Come in a Variety of Colors. Large individuals are often red or purple, while smaller Lions’ Mane Jellyfish tend to be shades of tannish-orange. Their diet consists of Zooplankton, such as small fish, other jellies, small shrimp, copepods and rotifers.

Whale sharks are also giants of the sea. But not to worry, they feed on krill and small plankton, not beach goers. The Great White Shark on the other hand is more the stuff of nightmares, and the ones you hear about in the news when it comes to shark attacks. They can reach a length of 15 feet and although they most often feed on sea lions and seals, they have been knows to attack humans.

The largest class of fish in the ocean are the osteichthyes, or bony fish.

They have skeletons primarily composed of bone tissue, as opposed to cartilage. Ocean sunfish or common mola (Mola mola) are the heaviest known bony fish in the world. They have been known to grow up to 14 feet and weigh 5,100 lbs. A single female sunfish can produce up to 300 million eggs per brood, which lands the species firmly in the Guinness Book of World Records. Watch a video of an enormous sunfish.

Covering two-thirds of the Earth’s surface, and full of fragile life, the ocean holds the undisputed title of largest ecosystem in the world. With all of this in the balance, it’s imperative that we take care of our oceans. Without the ocean we simply cannot survive!

Did you learn something new about the ocean and its wildlife? Leave us a comment below.