A near death experience involving a chicken and a hawk.

What started off as a novel hobby, has quickly turned into a mix of unexpected, strange, and yes, a rather large amount of affection towards our four chickens. We’ve documented our backyard chicken adventures for a while now and at this stage of the game we have fallen into a nice quiet routine.

Our poultry chickens get their allotted yard time and successfully deliver four eggs each morning. About every other week we will only get 3 eggs but I’m not complaining. Life is good and our daily regime is working quite nicely. Could backyard poultry farming get any more enjoyable? 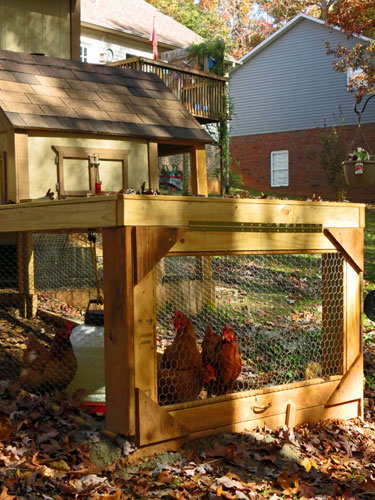 Expecting the unexpected and never a dull moment in our backyard.

Our office is located at the front of the house, so we have a line of sight view for everything that goes on in the front yard. It isn’t uncommon to see the chickens come wandering into the front yard scratching and pecking their way across the yard. Personally, I really don’t care for them to be here. We live in a cul-de-sac but the occasional delivery truck driver or garbage truck will come through at speeds that would make even an amateur race care driver envious.

There is also the matter of our landscaping. For all of the mulch that we have invested around our house, the mulch is a goldmine for the chickens. They can totally have the mulch spread out and laying in the yard in little to no time at all. The combination of these two aspects makes keeping them in the back yard more preferable. If only they could make invisible fences for chickens. Unfortunate, an incident may have changed the way the chickens view the front yard permanently. 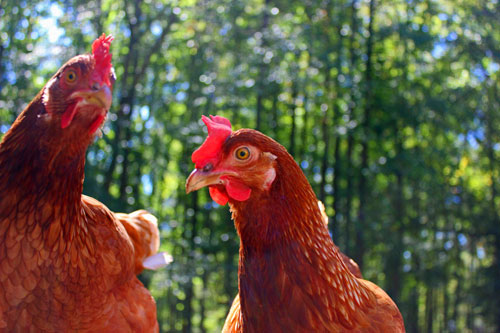 Danger for our chickens from above!

While sitting in the office last week I heard one of the chickens in distress. My first thought was that they were scuffling again. Yes, sibling rivalry does happen in the poultry world. But this was something completely different and uncharacteristic of their past behavior.

I turned to look out the window in time to see a hawk in flight lazily making it’s way to a neighboring tree line. I was immediately drawn to it’s talons and felt a sense of relief that they were empty. The screeching from hawks led me to believe that there was more than one of them. 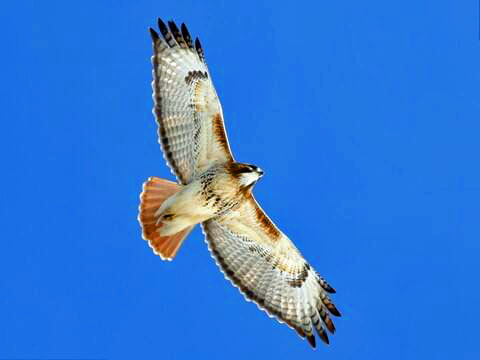 All of this transpired in a few seconds when all of the sudden there was a knocking at the door.

Just when I was starting to wonder ‘What else could possibly happen at this moment?‘ I opened the front door and three of our chickens came running into the house. I immediately moved past them and out into the yard to try and find the fourth.

There was no chicken in sight but at the end of the line of our drainage pipe sat a pile of chicken feathers. I kept turning in circles expecting to see it out in the yard but there wasn’t anything to be seen. It finally dawned on me that the front door was still wide open and there were three chickens running around inside the house. 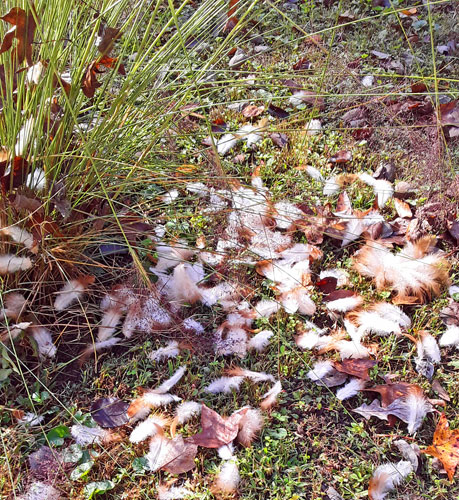 Now I’m running through the house looking for three chickens. They had run to the back of the house and were hiding out in the guest bathroom in the dark. In an attempt to coax them back outside via the backdoor they unexpectedly made their way into our bedroom. Our bedroom window overlooks the deck and rather then trying to get them out by going back through the house I simply put them out on the deck through our window. 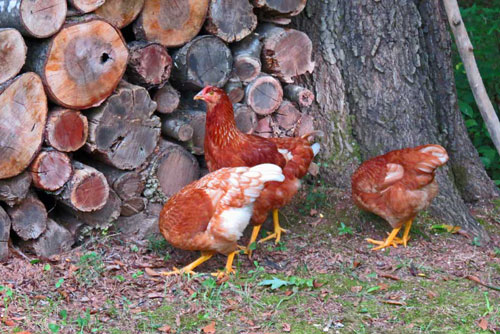 By the time I shut the window and got back through the house out onto the deck they once again had vanished. I went out into the back yard now and found them cowering under our storage shed. What ever it was that they had witnessed definitely had them stressed out. Once I got them back inside their coop, they passed the food and went upstairs to the laying area and huddled together.

The search for the missing chicken continues.

The fear that the three chickens were displaying led me to believe that there might be a chance that the fourth chicken was tucked away somewhere else. So I searched under the neighbor’s shed, the culvert opening, and out into our wooded area. We live on an acre of land so combing the woods was probably the most time consuming.

I made it all the way to the back of our property and had pretty much resolved myself to the fact that she was gone. Frustrated and defeated I came back to the coop only to find the fourth chicken staring at the other three inside the coop.

She didn’t seem that scared and her nonchalant attitude toward being placed back in the coop with the rest seemed anything buy terrified. I’m not sure where she had hid out but I waited until Silke came home to inspect them.

It didn’t take much to learn which chicken had lost a bunch of feathers.

It was quite a harrowing experience for all parties involved and it really made me think about how vulnerable the chickens are. We’ve always made sure to re-enforce their coop so that night time predators wouldn’t be able to get in at them.

Now the daytime predators were at bay and it was time to once again restructure their time outside free ranging. Images of myself in a rocking chair and wearing an old coon skin hat holding a rifle really don’t seem to fit the bill but I think that I’ll be keeping a closer eye on them from now on. If your chickens are happy and healthy than you should be getting a decent amount of eggs from them in return.

Do you have any comments or recommendations for backyard poultry farming? Please leave us a comment below.