Many writers and bloggers have writer’s block at one time or another. It’s a condition of being unable to think of what to write or how to proceed with writing. Here is a fun and easy writing exercise to overcome writer’s block and hone your writing skills. 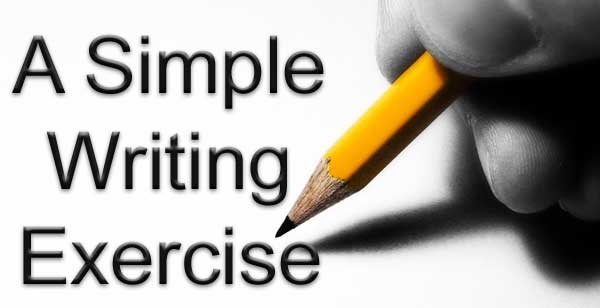 Here is one of our stories, read it to the end and give us your next three sentences to continue it.

Nick: The park in which the old man sat was mainly deserted except for the occassional jogger who continued right passed him. He sat quietly feeding the birds that had gathered around his feet out of the brown paper bag that was at his side. Everything looked quite picturesque, except for the evil smile on his face.

Silke: As luck has it at just this moment in time the heavens opened up and out poured the most horrid rain. The birds took flight and the lonely old man in his rain soak clothes looked around with a frown on his face. The lady sitting by the bus stop watched this scene play out and she thought of her father sitting in his little apartment thousands of miles away.

Nick: The bus driver took the whole scene in as he approached the bus stop to pick up the lady. Neither of them knew of the devine intervention that just took place to save the birds from an otherwise painful fate. The man was drenched and so was the brown bag of rice that he had been happily feeding the birds.

Silke: The fun being over for the old man he slowly got up from the bench and waved the remaining birds away. As he made his way over to the bus stop he noticed the lady just as she was paying for her fare. She reminded him of his long lost daughter, the one he left behind when he left her and her mother so many years ago.

Nick: For all the years that Earl Martin had been driving bus he had encountered his fair share of strange events. Watching the heavy rain shower and its abrupt ending bring this strange pair together, was something he found hard to miss. Earl was above strange occurances and felt that a more spiritual power was at work when it came to chance encounters.

Silke: Mabel, the young woman, always sat in the last row of the bus, this way she could watch everyone else on the bus. She saw the old man with the soaked rain coat walk on and take a seat in the front and wondered what his story was. She also noticed the bus driver scowling at him as he paid for his ticket, dripping rain water all over the seats.

Nick: Ignoring Earls scowl the old man made his way onto the bus. Rain water dripped off his drenched soaked clothes, he had left the brown bag of rice behind and forgotten. He stole a glance back at Mabel and his mind began reeling of a past that he thought he had forgotten, not on purpose but because of time.

Silke: Fourty years wents by in a flash and the old man, Greg, found himself back in another era, another bus, another life time. It was the early 50’s and he was a young man again, riding the bus home after finishing two long years of service in the Army. He happened to be sitting next to the most beautiful woman he had ever seen, trying to find the nerve to start a conversation.

Nick: It was easy to look back and be critical of himself because of an almost missed opportunity. The woman looked around the bus and asked him if it would be alright to sit with him. Greg’s luck had changed that day, to find the bus full and his seat the last one available.

Silke: All of a sudden the bus driver laid on his horn and Greg returned to the here and now. He turned around, found the eyes of the young lady in the back row of the bus and flashed her a smile that reached from one ear to the other. With that he got out of his seat, pushed the stop button and left the bus.

Nick: Earl was happy the rain soaked passenger had decided to part ways with his bus. Mabel was left with a feeling of recognition and familiarity with the now departing rain soaked rider. Greg saw neither Earls disdain nor Mabels perplexed expression but quietly made his was down the street toward his home.

Silke: Greg will live to see another day after all. That morning, after another sleepless night, he had decided to feed rice to the birds, and an overdose of sleeping pills to himself. Seeing the young lady on the bus had changed all that, now he was full of live and excitement once again.

Nick: Mabel went home and later that evening made a phone call that she had always had an excuse or reason to put off. Listening to her father that night brought to her a sense of inner peace that she hadn’t felt in a long time. The moment would be remembered because it would be the last time she would ever hear her father’s voice.

Alright, it’s your turn now… how do you want to continue the story?

Leave your next three sentences in the comments below.

Did you enjoy this simple writing exercise? Start your own story three sentences at a time.

Have fun and happy writing,

11 thoughts on “A Simple Writing Exercise”