Sharing our experiences after attending a Glazer-Kennedy marketing seminar.

Silke and I were invited to join her boss, Jeff Meland, to attend a ‘F-A-S-T Implementation Boot Camp’ hosted by Bill Glazer. I have been to marketing seminars before, but never to this particular one. Jeff gave us some material to look over before we went to let us know what we we’re getting ourselves into. So with two days worth of clothes and a small amount of skepticism we headed off to Chicago.

Bill Glazer is the previous owner of a men’s clothing store and is also the author of the number one best selling book:

The material from the book isn’t pulled out of thin air but out of Bill’s personal experience of marketing his own clothing store.

Taking the stage promptly at 8:00 a.m. Monday morning, Mr. Glazer was off and running. My first thought was that he was a bit full of himself but then you have to have a little self confidence to be able to stand up in front of 300 people and speak. 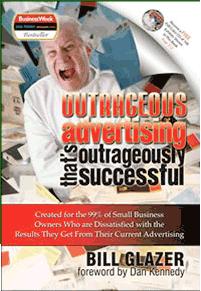 I’m not going to give anything away here about the specifics of what we talked about but I must say the material that was covered was extremely compelling.

Everyone was given a pen and a three ring binder containing material that covered the subject matter. There was fill in the blanks on every page so the listeners would remain engaged. On the breaks everyone networked while they could and the conversation usually came back to: ‘Why didn’t I think of that?’

There was a lot of material that was covered but I never felt over-whelmed. In fact there were a few times that I felt we had just gotten started and suddenly we would be solicited for more conferences or books.  In retrospect it was cleverly marketed in that respect. They would wow you with information and then plug a product that they sold. It all went hand in hand quite well.

The whole conference was very well planned and orchestrated. The only hiccup that came was on the first day when they told 300 people to break for lunch and to be back in an hour. There was a buffet in the hotel but the line for that came out into the hallway. The closest place to eat was out across the parking lot. We stood for thirty minutes waiting to just get through the line and order. People straggled back in while they had already started. More time was alotted the next day.

Tuesday we left after the conference and made our way home. Through the shuttle ride, the flight, and the drive home, we all brain stormed on how we would implement our new found knowledge and continue this spark that had been ignited within us.

To summarize the whole experience in one word I would have to say: ‘Rewarding’.  Many thanks to everyone involved with the planning and organizing the event. To Mr. Glazer himself for enlightening others so that they can better learn to market not only their businesses but themselves as well.

Have you been to a Glazer-Kennedy marketing seminar? Share your experience with us below.

3 Responses to The Glazer-Kennedy Experience