The Evolution Of Dean Koontz’s Icebound

Was the Dean Koontz Icebound novel a baseline for multiple shows?

This is a timeline of how the book Icebound influenced other mediums, from movie to comic book. I liked the close confines of this story by Dean Koontz and how the characters were left to deal with situations in a more strict environment. Learn more about the the Evolution of Icebound.

What does is mean to be icebound?

The word ‘Icebound’ is an adjective, meaning someone or something is completely surrounded, obstructed or covered by ice. For instance, in 1915 polar explorer Ernest Shackleton’s ship, Endurance, became icebound in the Antarctic.

Here is an excerpt from the Dean Koontz book ‘Icebound’: The arctic night is endless. The fear is numbing. Screams freeze in the throat. Death arrives in shades of white. And cold-blooded murder seems right at home. Conducting a strange and urgent experiment on the Arctic ice field, a team of scientists has planted sixty powerful explosive charges that will detonate at midnight. Before they can withdraw to the safety of their base camp, a shattering tidal wave breaks loose… Read more 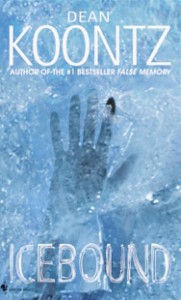 The book ‘Icebound’ was originally published in 1976

Do I feel there is a pattern of evolution here? Yes, hence the title!

If imitation is the sincerest form of flattery, then I think Dean Koontz can take this one all the way to the top. Can you tell I’m a huge Dean Koontz fan? We have a fairly big selection of his books in hardcover on our book shelves. If you don’t want to purchase or rent a copy of this book at your local library, check this out:

Getting back to Dean Koontz’s, his first published book ‘Star Quest’ was published in 1968. As of 2022, Dean Koontz has published over 100 novels and has written multiple books under different pseudonyms.

How do you feel about the evolution of Icebound? Let me know in the comments below. I’m always open to constructive criticism.

2 thoughts on “The Evolution Of Dean Koontz’s Icebound”